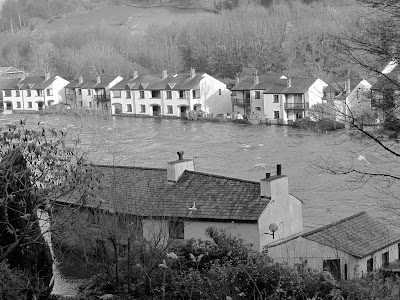 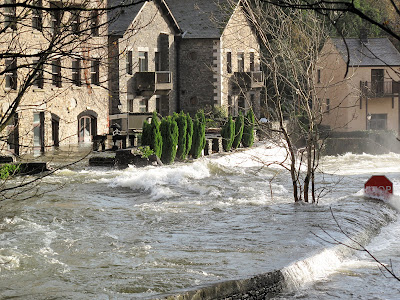 More photographs and reports, this time from cousin Julian. He reports on his own village, and several others in the area:

Posted by John Dee at 22:19 No comments: Links to this post

In their citation, the judges said: "Paul uncovered the truth by persistently questioning and challenging the police account, by following up on the family, and assiduously garnering eyewitness evidence, until finally he obtained incontrovertible video evidence from a bystander who filmed the incident. In achieving this Paul used every method now available to a modern journalist, online and in print, to keep pushing and nudging at the story until he established what had really happened.

"His work led to internal and independent police inquiry, extensive and international public comment, and has changed the way police behave in potential riot situations, and how they receive and investigate complaints. All in all, his story was a triumph for the assertion of civil liberty, as well as a revelation about policing conduct."

Tony started his career on the Liverpool Post, moving in time to become political correspondent of The Times. In 1986 he became the first political editor, of the Independent.

Posted by John Dee at 12:55 No comments: Links to this post 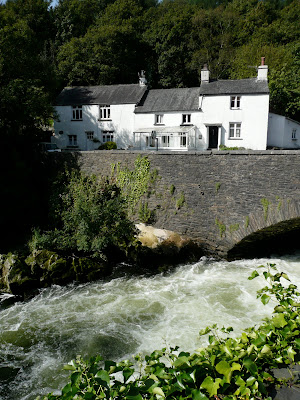 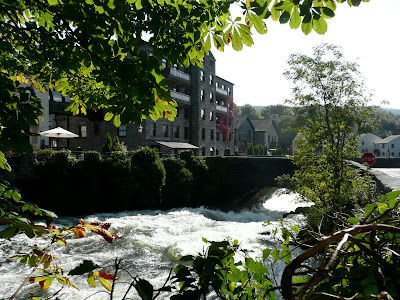 The storms over Cumbria have brought destruction and deaths, well reported on all media, with images of the damage to many homes and businesses. However, the damage is wider than just the area of Cockermouth and west Cumbria.

In Backbarrow the old blue mill, now converted into the Whitewater hotel, stands right beside the river. The first two photos show the scene as I saw it on a typical day last September.

Suzannah writes: “The Hotel and the lower part of Backbarrow have been totally flooded out. As you can see the bridge now has a raging torrent running over it, the first time ever that the river has been this high”

Later, it was washed away completely. The Bailey Bridge footbridge, just a few metres downstream, was also completely submerged. 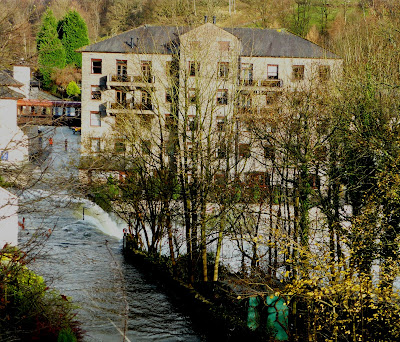 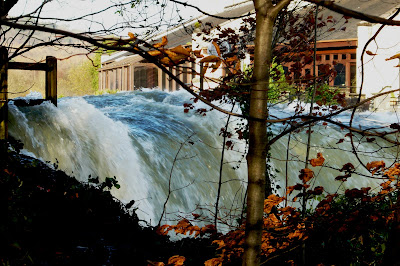 Posted by John Dee at 11:59 No comments: Links to this post 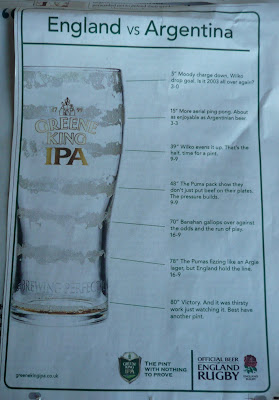 I’ve always been a ‘glass half full’ sort of chap, looking optimistically at life and all its challenges.

Posted by John Dee at 13:07 No comments: Links to this post 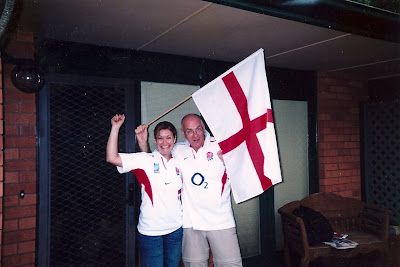 Six years ago this week I sat with Natalie Slessor in the Olympic Stadium in Sydney and saw England win the Rugby World Cup. It was an amazing night, a memorable trip, and a proud achievement, which was rightly celebrated with that parade through the streets of London. Since then it’s been downhill for England rugby. 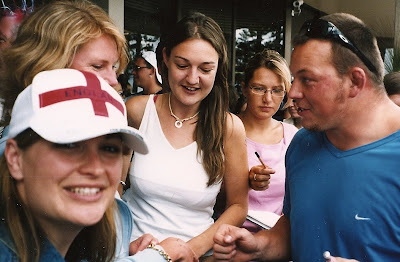 Posted by John Dee at 17:28 No comments: Links to this post

The National Ceremony of Remembrance will take place this Sunday, centred on the Cenotaph service and parade in Whitehall on Sunday. At 11.00 the two minute silence will be observed following which over 7000 veterans will to take part in the March Past.

The Royal British Legion is a charity that provides financial, social and emotional support to millions who have served and are currently serving in the Armed Forces, and their dependants. The Legion was founded in 1921 as a voice for the ex-Service community and with over 380,000 members it continues to safeguard their welfare, interests and memory. The Legion is best-known for the Poppy Appeal, which in 2009 is emphasising the need to help the Afghan generation of the Armed Forces and their families – today and for the rest of their lives.

Over one million casualties are now commemorated at military and civil sites in some 150 countries. The Commission has constructed war cemeteries and plots, erecting headstones over graves and, in instances where the remains are missing, inscribing the names of the dead on permanent memorials. The largest of the memorials to the missing, is the Thiepval Memorial in France, carrying the names of over 72,000 casualties from the Battle of the Somme.

The Commission maintains an excellent electronic version of the records, which can be accessed by anyone interested in tracing family via the "Debt of Honour Register".

This comprehensive site is the Commission's database listing the 1.7 million who died and the 23,000 cemeteries, memorials and other locations worldwide where they are commemorated. The register can also be searched for details of the 67,000 Commonwealth civilians who died as a result of enemy action. 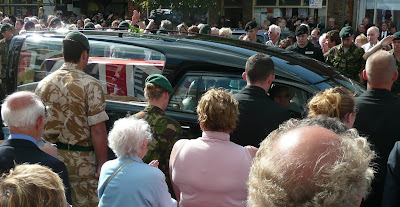 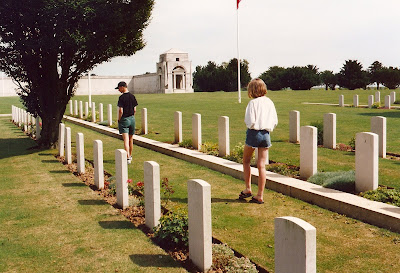 The bodies of eight British servicemen killed in Afghanistan were repatriated on 14th July 2009
Young people study the graves at the Thiepval Memorial, northern France
Posted by John Dee at 16:04 No comments: Links to this post 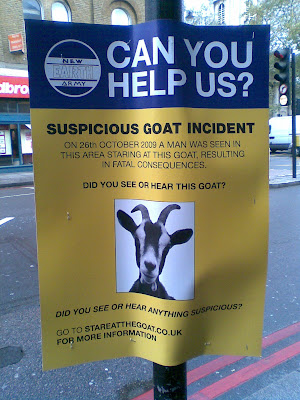 I saw this poster on the main road this afternoon. I assume it’s connected with the launch of the film “The Men Who Stare At Goats” based on Jon Ronson’s book. I haven’t seen any press reviews, so it must be imminent. You see many strange things around here so the line about a man staring at a goat may be quite plausible to some.

Posted by John Dee at 16:58 No comments: Links to this post 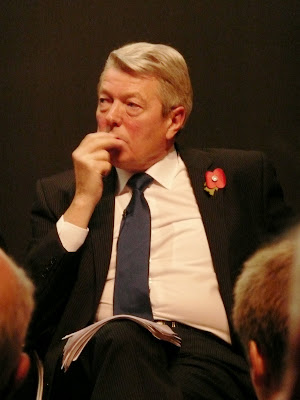 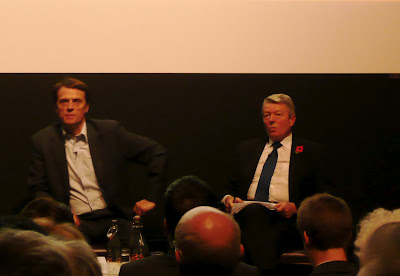 Up early and off to the RSA to hear the Home Secretary’s speech “Security in the 21st Century: Global, National, Local”

It is likely to be an interesting morning for Alan Johnson following his sacking last week of the Chair of his Advisory Council on Misuse of Drugs. The press and tv are camped in John Adam Street and inside a packed house is waiting to hear him.

The word is that Johnson has been doing the rounds of broadcast studios since early morning, defending his move on the drugs chief. Another drugs advisor has resigned over the weekend and more are rumored to be considering their positions.

Mathew Taylor, Chief Exec of the RSA who is hosting the event, appears at 9.35 to apologize for the delayed start: "I’m told he is just one minute away".

At 9.45 Matthew returns: “He is now five minutes away; he’s been taking scientific advice on his journey timing”

When he finally arrives Johnson makes a good speech, his first major speech on immigration. He seems clearly at ease with his brief, and surprises us with his admission of government failings. He seems to get a good reception in the papers this morning.

Alan Johnson coupled his admission yesterday of having done too little to tackle Britain’s immigration crisis with criticism for some of his predecessors for having ignored the problem. He conceded that Labour had not handled immigration problems well. The Times.

Some parts of the country have been "disproportionately affected" by the influx of migrants …. his predecessors had ignored for "far too long" problems in the system that led to huge backlogs of asylum seekers and foreign national prisoners …… Labour, as well as previous Governments, had been "maladroit" in their handling of the immigration issue. The Telegraph

Most interesting, given the extensive new powers sought by Blair and Brown, and the fiasco of the 90-day detention row: The home secretary also conceded that some of the counter-terrorism proposals made after the 7 July 2005 bombings were "too draconian" and "not the right way to go". The Guardian

Alan Johnson is the 4th Home Secretary in 5 years.

The late arrival meant that there was little time for a detailed response from Professor Michael Clarke and only three questions from the audience. I was hoping to ask Alan Johnson, the former General Secretary of the Communication Workers Union, what advice he would give to his former union members, and his government colleagues, on their respective handling of the current long-running strike at Royal Mail. Given his openness and frankness it would have been useful to hear his views.

Later, I wondered about the future: might Alan Johnson be the next leader of the Labour party? How will he perform when in opposition? Is he a future PM?

Posted by John Dee at 11:20 No comments: Links to this post