I know a great many people really enjoyed the Opening Ceremony last Friday night.  For me, there was so much to see and hear, and so many references to our Isles of Wonder, that it was hard to take it all in. Looking at photos in the press over the weekend I saw several things that I'd missed in the broadcast.   Some parts of the show are available for viewing and listening on the BBC's own website and on YouTube; just follow the links below.

Isles of Wonder: The BBC film follows the Thames from its source in Gloucestershire, through the Cotswold Hills and into London itself.   On the way, we encounter Ratty and Mole, from The Wind in the Willows, the Eton Boating Song, great British Olympians of the past, catch a glimpse of the Oxford and Cambridge boat race, Battersea Power Station with Pink Floyd’s flying pig, the Houses of Parliament, the London Eye – until we reach the Olympic Stadium itself. http://www.youtube.com/watch?feature=endscreen&NR=1&v=7tm7NWsxRRc

Isles of Wonder.  The Decca recording was made available on iTunes as soon as the Ceremony finished.  Music for the Opening Ceremony features many of the  highlights of the show, including reworked tracks by the  Chemical Brothers, Fuck Buttons, Blanck Mass, Arctic Monkeys, Emeli Sandé  and Mike Oldfield as well as two huge new specially commissioned pieces by  Underworld (the fifteen minute Pandemonium section soundtrack And I Will Kiss  and Caliban’s Dream, the musical announcement of the Olympic torch’s arrival in  the stadium).
http://itunes.apple.com/gb/album/isles-wonder-music-for-opening/id548480746

Additionally, there is a great collection of still photos from the evening here: http://www.dailymail.co.uk/news/article-2179920/Olympics-Opening-Ceremony-London-gets-2012-Games-way-Greatest-Show-On-Earth-rounded-Macca-course.html

Posted by John Dee at 17:43 No comments: Links to this post 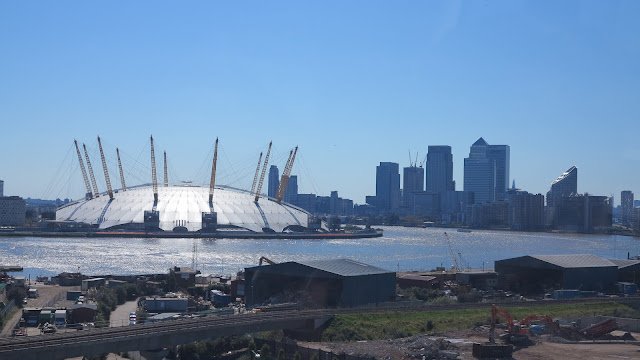 It is twelve years since the Dome was completed and officially opened in time for the Millennium, since when it's name has changed to the o2 Arena.   For the duration of the Olympics it is called the North Greenwich Arena since o2 is not a partner/sponsor.   What a shame it couldn't just be The Dome.

I took the photo from the new cable car across the river, the day before it broke down.


Posted by John Dee at 22:27 No comments: Links to this post

Coming to London this summer?

With certain London attractions charging over £100 for a family of four, a day out in the city can be depressingly expensive. But it needn't be. Follow the Guardian's guide to brilliant things to do for free, and have a top day out without spending a small fortune.


For the first instalment of their world-class museums, galleries and more click here

Posted by John Dee at 21:12 No comments: Links to this post

God Save the People: All you need is Love


Two large images here, both extremely well realised, on adjacent faces of a large building which fronts onto both New Oxford Street and High Holborn.  The building sits on a very busy tourist route from Covent Garden, up Drury Lane, onwards to the British Museum, and when I’ve passed by there have been crowds of people snapping these works.

The Camden New Journal believes them to be the work of French street artist Mr Brainwash, a contemporary of Banksy.  Los Angeles-based Mr Brainwash, who is known for his street art documentaries, filmed the reclusive Banksy in Exit Through the Gift Shop.  He was filming in the area last week for his latest project. (June 2012) 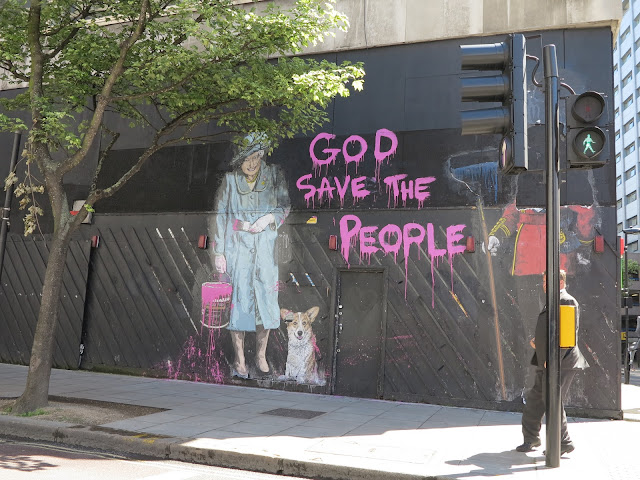 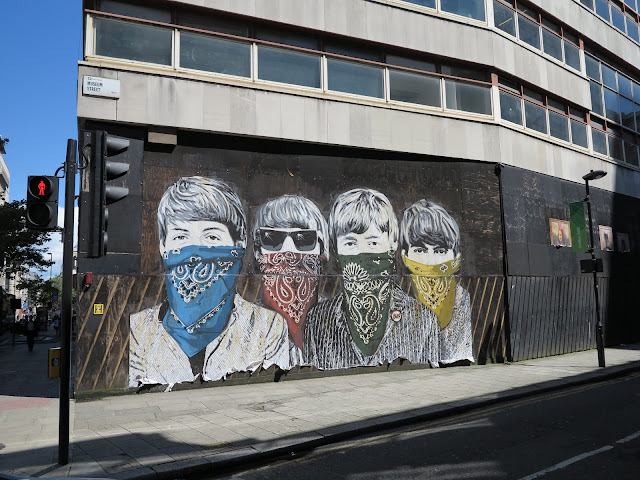 The building itself is interesting.  It’s a huge triangular lump, with floors of 40,000 sq ft each.  Constructed for the Post Office it was one of their central London sorting depots, but closed in the 1990’s.   I know many attempts have been made to sell it, surely a prime location for a large hotel, but one story I heard was the cost of demolition was extremely high.  It stands above the Post Office underground railway line.

Although boarded-up, the building is available for short term hire as a location for film and music shoots, and has served as a venue for fashion shows and parties. Full details here.

Some time ago the British Museum was rumoured to be considering using the site, and the Arts Council also showed some interest.  Two years ago it was scene of an 18 hour rave party for 1,000 people which rather upset the Daily Mail.

Posted by John Dee at 13:18 No comments: Links to this post 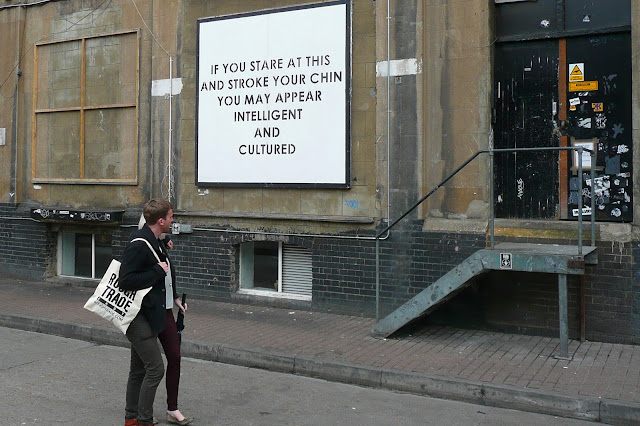 Old Truman Brewery, E1
Posted by John Dee at 13:29 No comments: Links to this post

I do wonder how this happens – or should that be happen’s.  It is (it’s?) understandable that some people may not know about punctuation, or possibly were not educated in this country, but when I see signs produced professionally, I am amazed.   The big surprise in this group of photos is that the coffee chain Apostrophe (who style themselves “the accent on taste”) should get it wrong on the second line of their delivery cart. 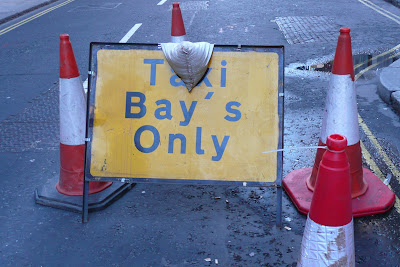 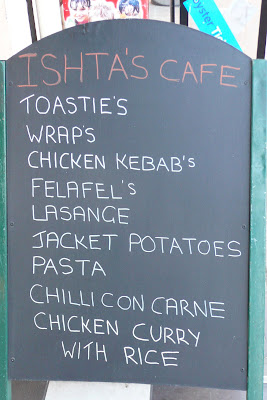 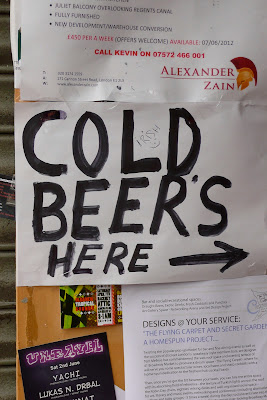 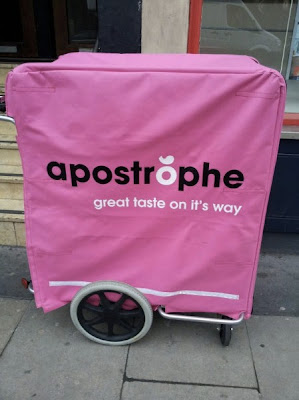 Six months ago, the bookstore which carried the name of its founder Tim Waterstone, acquired a new managing director, who decided to re-instate the capital letter at the beginning of the name. No issue with that.  At the same time he announced that it would no longer be punctuated with an apostrophe. Some issues there. This editorial appeared in the Guardian

Waterstone's or Waterstones? The bookstore's dropping of its apostrophe shows confusion rules in the book trade
Waterstone’s or Waterstones?  The bookstore chain's dropping of its apostrophe shows confusion rules in the book trade, where Foyle's long ago became Foyles and Blackwell's retains an apostrophe while Hatchards does not. In the high street, Boots and Clarks sit alongside McDonald's. Likewise in groceries, where it's still Sainsbury's but also Morrisons. Among London stores, Heal's persists with what Harrods and Selfridges have discarded. In the north, the old Lewis's department stores had one, but John Lewis never has. In Bradford, Brown Muffs went without, but was still BM's for short. Across the pond, it's the same mix. Macy's and Bloomingdale's uphold punctuation values while Starbucks and Fuddruckers cast tradition aside. You can watch cricket at Lord's while betting on it with Ladbrokes. But the recent problems at Blacks are enough to send a chap off for a gin at White's. Now, would that be Gordon's, sir, or Boodles?

See how the book trade press responded to the news here

The Apostrophe Protection Society was started in 2001 by John Richards, with the specific aim of preserving the correct use of this currently much abused punctuation mark in all forms of text written in the English language.  You may not wish to support its aims, but you can find here their useful rules for use of the apostrophe.


Seven years ago London won the right to stage the 2012 Olympic Games.  Within 24 hours four bombs had been exploded in the city, killing 52 people.

I want to say one thing to the world today. This was not a terrorist attack against the mighty and powerful, it was not aimed at presidents or prime ministers. It was aimed at ordinary, working-class Londoners, black and white, Muslim and Christian, Hindu and Jews, young and old; an indiscriminate attempt to slaughter, irrespective of any consideration for age, for castes, for religions, whatever.

That isn't an ideology, that isn't even a perverted faith. It is just an indiscriminate attempt at mass murder. We know what the objective is. They seek to divide Londoners. They seek to turn Londoners against each other.  I said yesterday to the International Olympic Committee, this city of London is the greatest in the world because everybody lives side by side in harmony. And Londoners will not be divided by this cowardly attack.

Posted by John Dee at 11:01 No comments: Links to this post