St Paul's at night, in black and white. I took this last Friday evening from an adjacent rooftop. You can see the arc of the London Eye over to the left.
It is a little reminiscent of the famous photograph showing the cathedral during the blitz, on the night of 29th December 1944, which you can see here. 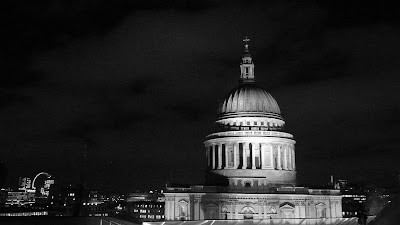 Posted by John Dee at 11:38 No comments: Links to this post

I recently came across a wonderful collection of old photographs taken in central London in the 1950’s, ‘60’s and ‘70’s. They capture a very different scene from that which we see today. Lots of red buses, classic motorcars, lovely shop fronts, and many individual shops, with very few chain stores. However, what is most noticeable is how quiet the streets are, with comparatively light traffic and remarkably few pedestrians. It’s not a scene I recall from when I was a student in the late 1960’s, living on Tottenham Court Road. My memory is of busy streets, and crowded pavements: I think my memory is playing tricks, and these photos are the more accurate.

The complete set of photos is here: http://www.flickr.com/photos/wasleso/sets/

Below many of the photos people have added comments, tried to identify the location, and on this one added some lovely history about the characters seen in the photograph: http://www.flickr.com/photos/wasleso/961431880/in/photostream/

Posted by John Dee at 11:04 No comments: Links to this post

I’m rather pleased with this sequence of photographs, although of course luck plays its part. I shot them one morning in June 2009 at the house in France of my dear friends Judy and Richard who were given the bird box as a present. 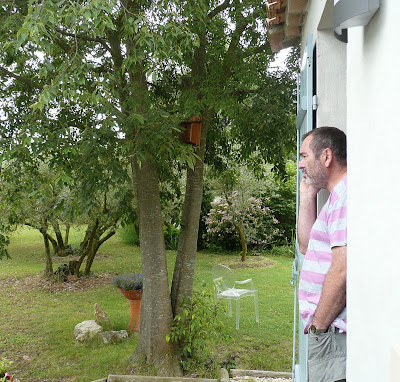 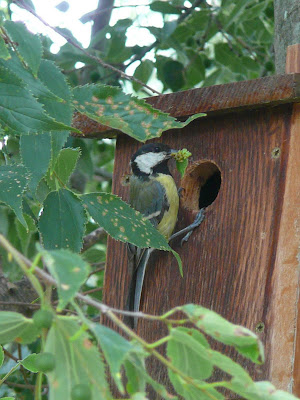 Feeding the young on olive flowers 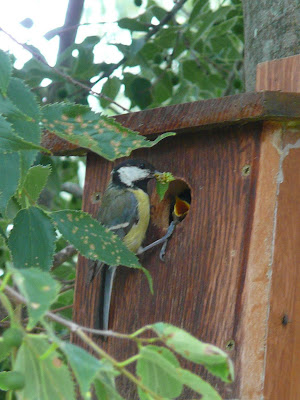 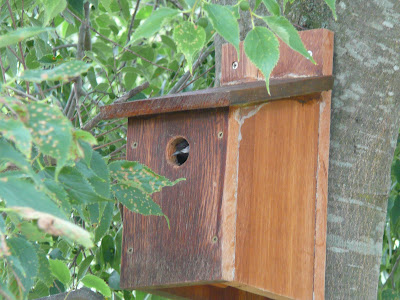 And now I’ve got one, below, a birthday present from my granddaughter, installed on my terrace this afternoon. I shall keep my camera at the ready over the coming weeks in case somebody takes up residence. 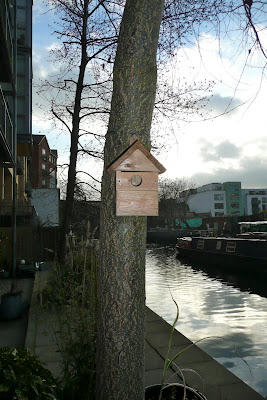 Posted by John Dee at 16:25 No comments: Links to this post

Seen yesterday in Andrews Road, E8. I don’t know if this is a dog doing its business and then some wit ‘crowning’ it, or if it is not even a real turd but an artist’s trick. Whatever, it caught my attention. 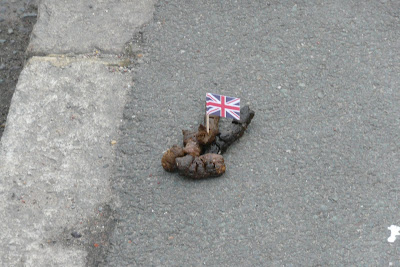 Posted by John Dee at 10:37 No comments: Links to this post

The Turner Prize is an annual contemporary art award, set up in 1984 to celebrate new developments in contemporary art. It is awarded each year to “a British artist under fifty for an outstanding exhibition or presentation of their work in the twelve months preceding”. The competition is organized by the Tate Gallery and is named after the great landscape painter JMW Turner.

Controversy often surrounds the announcement of the shortlist each summer, with many traditionalists unhappy that it includes work such as video art, sculpture, performance, installation art, and other modern media. Tracey Emin’s unmade bed and dirty underwear made the headlines in 1999. Where work on canvas is seen, it can be as surprising as Chris Ofili’s 1998 use of elephant dung attached to his canvases. Previous winners have included Anish Kapoor, Gilbert and George, Richard Long, Damien Hirst, Rachel Whiteread, Martin Creed, Grayson Perry, Richard Wright.

In 2010 the Prize was awarded to Susan Philipsz, the first time it has gone to an artist who specializes in aural work. She made an installation under three bridges in Glasgow in which she sang traditional Scottish songs.

By chance, there has been a series of installations of her work in the City of London this last three months called ‘Surround Me’. I went along during the New Year holiday to look and listen. It was commissioned by Artangel in six different places within the Square Mile, but only active at weekends, when the traffic noise recedes and many parts of the City become eerily quiet.

SURROUND ME embraces the vocal traditions of the City of London connecting themes of love and loss with those of fluidity, circulation and immersion; the flood of tears, the swelling tide and the ebb and flow of the river, to convey a poignant sense of absence and loss in the contemporary City of London.

At each location there is a small plaque with a description of the piece you will hear, and a short note about the source. So at Moorfields Highwalk you hear Philipsz singing the madrigal Weep, O Mine Eyes, written by John Bennet in 1599.  It lasts just 1 minute 58 seconds, repeated every five minutes. 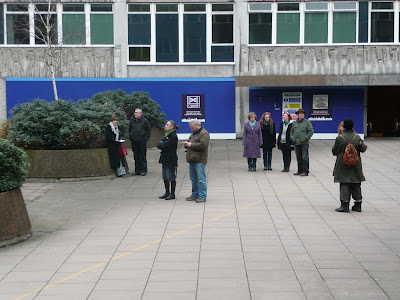 You can see some video of this here

In open spaces or tiny enclosed alleyways small groups of people congregate: where the loudspeaker is visible, people are drawn to it, where it is hidden, and the sound bounces off adjacent buildings, they seem more comfortable to stand or wander and listen. The most arresting sight was the little dog I saw at three sites: at first appearing confused, later quite engaged. 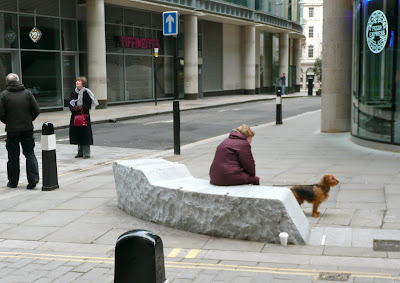 Onward to Tokenhouse Yard. In Daniel Defoe's account of the plague in London he describes: "Passing through Tokenhouse Yard, in Lothbury, of a sudden a casement violently opened just over my head, and a woman gave three frightful screeches, and then cried, 'Oh! death, death, death!" in a most inimitable tone, which struck me with horror, and a chilliness in my very blood. There was nobody to be seen in the whole street, neither did any other window open, for people had no curiosity now in any case, nor could anybody help one another."
The melancholy atmosphere of the Yard is perfect for The Silver Swan. The lyrics are a metaphor for the end of an era, the end of the madrigal or maybe the Elizabethan musical tradition. They could also symobolise the end of capitalism or more general feelings of mourning and loss. 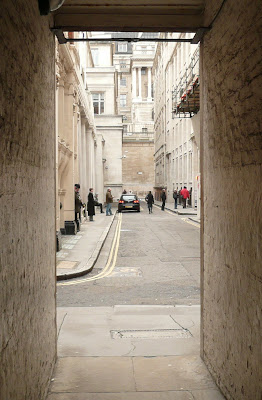 The silver swan, who living had no note,

Leaning her breast upon the reedy shore,

Thus sang her first and last, and sang no more:

My next location is Change Alley 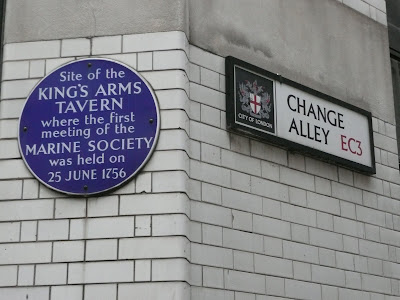 Change Alley leads off Lombard Street, near the Bank of England. It is known as the precursor to the London Stock Exchange with the real trading conducted in the Alley’s coffee houses.

The idea of the trade in stocks and commodities in the City contrasts with the simple selling of oysters for the more uncomplicated pleasures of a well-prepared meal. The round is for three voices, one voice following the other in a layered cycle of singing. There is a short piece of video here (apologies for the quality).

Here I listened to Philipsz sing New Oysters, by Thomas Ravenscroft, 1609. This is played from two speakers set well apart from each other. 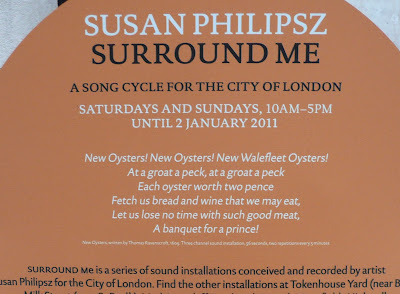 You can see and hear it here.

The final stop on my tour was right beside the Thames, directly under London Bridge, where Susan Philipsz sings Flow My Tears, written by John Dowland in 1600.

Flow, my tears, fall from your springs

There let me live forlorn 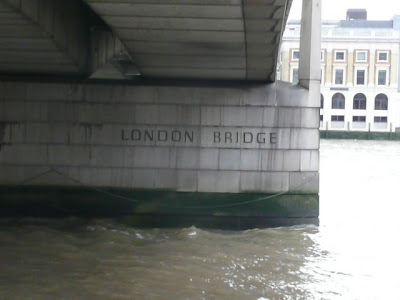 It was a really interesting walk between the six locations, in a near-deserted city, on a cold grey day, and yet fascinating at each place to see the site and hear the songs. I don’t know what the art world makes of Philipsz success with the Turner Prize, but for me this was wonderful: haunting, moving, evocative.

The installations have now closed but you can read more about it in this Interview with Susan Philipsz and read about Twenty years of the Turner Prize here.

Posted by John Dee at 13:39 No comments: Links to this post

Those nice people at the Guardian have emailed me with notice of an offer in tomorrow’s paper. The deal is two-for-one city breaks via Eurostar to Paris, Brussels or Lille. This is just 10 days after the paper reported:

Eurostar passengers were queuing again at St Pancras International station, in London, from the early hours. Thousands had to wait in the cold for up to eight hours yesterday, with queues snaking more than half a mile around the terminus. The company urged passengers not to travel. "We are asking all customers booked to travel before Christmas to refund or exchange their tickets free of charge if their travel is not essential," a statement said. ……..Last night first aiders were drafted in at St Pancras where thousands of passengers had been queuing for hours after Eurostar services were cancelled. St John Ambulance were asked to send eight crew members as a precaution while many waited in the bitter cold outside the station.

To take up the offer you’ll need to travel before the end of March. Now, remind me: when does the bad winter weather finish? 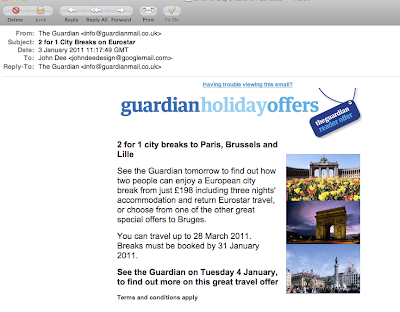 Posted by John Dee at 12:03 No comments: Links to this post