Shit London: Snapshots of a City on the Edge


Shit London began life as Facebook group for Londoners to post their pictures of strange and unusual things they spotted on their travels around the city. These are photographs of the unintentional human comedy that surround us in the city. It’s the flotsam and jetsam of city life, the overlooked minutiae, the tragic, the grotesque and the basest of base. It’s the adapted posters, the dirty joke on the back of a van, the mispelt signs, the glory hole in the public loo, that weird shop down the end of your road and the knob graffiti strategically placed for maximum effect.
The Shit London Awards are now in their second year of celebrating the crummy, weird and outright rubbish sides to the capital. These are awards open to all with no particular photographic skill required to enter. This is photography which doesn’t favour a DSLR over an ancient camera phone, where the focus isn’t on focus and where composition isn’t part of the competition.
You will find the 2012 Awards, and much, much more, here:

Posted by John Dee at 18:28 No comments: Links to this post 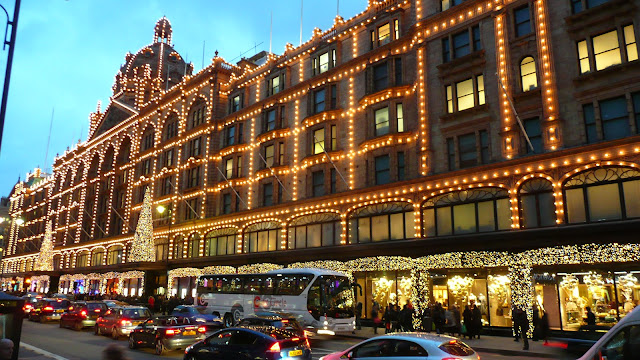 Christmas lights on Harrods, the biggest department store in Europe, with over 1 million sq feet of trading space.
Posted by John Dee at 10:24 No comments: Links to this post

Map Shows Every London Bomb Of The Blitz

The excellent blog Londonist has a fascinating item today:

Wow. Simply, wow. Someone’s only gone and mapped every known bomb of the Blitz. Bombsight.org contains thousands and thousands of datapoints and shows, on even the most glancing inspection, just what a pummeling our city took all those years ago.  The map is based on archive research, drawing together official bomb censuses for the period between September 1940 and June 1941. It therefore lacks later bombing raids and attacks by flying bombs and rockets later in the war. What is there, however, is an invaluable resource for researchers and anyone with a curiosity about the history of our city.

Posted by John Dee at 17:50 No comments: Links to this post