How I Made a Twat of Myself on Twitter

"... if you think you’ve gone over the top or just been plain wrong, say so. Acknowledge it. Apologise and put it behind you."

So says blogger Ian Dale, and it is sound advice. Read his piece here.

Posted by John Dee at 14:28 No comments: Links to this post

I am currently reading Decline and Fall by Chris Mullin, his diaries from the years 2005-2008, when he had ceased to be a government minister and had returned to the backbenches. It charts the last days of New Labour.

In the Tea Room (of the Commons) this evening Des Browne told me the following tale about a constituent, a signalman on the railways, who early each morning took a short cut to his signal box across the estate of the local laird. One day he was intercepted by the said laird on horseback.

‘What are you doing on my land?’

‘I’m on my way to work,’ replied the signalman, adding insolently, ‘a concept that may be unknown to you.

‘My ancestors fought for it’

‘Well,’ replied the bolshie signalman, ‘if you come down off that horse, I’ll fight you for it.’

At this the laird, recognising that he had met his match, rode away.

Chris Mullin was the Member of Parliament (MP) for Sunderland South from 1987 to 2010. His early working life was as a journalist at Granada TV where he was a member of the influential team that made World in Action, arguably the most important ever investigative series, in the days when British broadcasters saw such things as part of their responsibility.

One of the many subjects covered, in several editions, was the case of the Birmingham pub bombings in 1974, in which 21 people died. Six Irishmen had been convicted for this crime. In 1985, the first of several World in Action programmes casting serious doubt on the men's convictions was broadcast. In 1986, Chris Mullin's book, Error of Judgment - The Truth About the Birmingham Pub Bombings, set out a detailed case supporting the men's innocence, including his claim to have met with some of those actually responsible for the bombings.

Chris Mullin was pivotal in keeping alive the campaign to prove the men’s conviction was a miscarriage of justice. At their third appeal in 1991, evidence of police fabrication and suppression of evidence, and flawed forensic evidence, led to the Crown withdrawing most of its case against the men. The six were released in 1991 but had to wait a further ten years to be awarded compensation.

Posted by John Dee at 15:43 No comments: Links to this post

"The phone rang one evening when I was watching TV so I said tell whoever it is to call back in 20 minutes. Twenty minutes later, Gordon Brown rang"

If a headline's purpose is to get attention, this one certainly did. It appeared in Review on Saturday above this article about Scottish crime writer Val McDermid.

Posted by John Dee at 09:51 No comments: Links to this post

It has been a demoralising week as England agonises over a nihilistic underclass soured by a society built on an obsessive consumerism in which they cannot partake and so abysmally lacking in communal values that they can wantonly destroy their own cities, and imagine that they have achieved some twisted social solidarity in the process.

Those aren’t my words, they come from David Hopps and appeared in the Sports pages on Wednesday.

We have had wall-to-wall coverage on television, endless hours on the radio, dozens of extra pages in the newspapers; ministers, finally, came back from their holidays, and Parliament was recalled; the police eventually flooded the streets, five people have died; and now at least we have calm. As for me, well I’m no clearer about why people rioted, nor what the causes are. What I do know is that our political leaders and commentators have on the whole rushed to produce (or be seen to produce) some tough-sounding measures, to appear to be in control. Most of these seem immediate, shallow, and far from addressing what surely are very difficult underlying issues. More time listening, learning, trying to understand, may produce more of benefit in the long term.

I have read a few pieces in the press which I think are worth highlighting:.

Peter Oborne in the Daily Telegraph:

Something has gone horribly wrong in Britain. If we are ever to confront the problems which have been exposed in the past week, it is essential to bear in mind that they do not only exist in inner-city housing estates. more here

Matt Cavanagh in the New Statesman:

But while it is clearly criminal as opposed to political, it cannot be criminality "pure and simple", as the Prime Minister suggests, because the pattern is clearly not random nor indeed typical of ordinary criminality. more here

But there's no mystery as to where the upheaval came from. It was triggered by the police killing a young black man in a country where black people are 26 times more likely to be stopped and searched by police than their white counterparts. The riot that exploded in Tottenham in response at the weekend took place in an area with the highest unemployment in London, whose youth clubs have been closed to meet a 75% cut in its youth services budget.

It then erupted across what is now by some measures the most unequal city in the developed world, where the wealth of the richest 10% has risen to 273 times that of the poorest, drawing in young people who have had their educational maintenance allowance axed just as official youth unemployment has reached a record high and university places are being cut back under the weight of a tripling of tuition fees. more here

A surprising piece from Russell Brand:

As we sweep away the mistakes made in the selfish, nocturnal darkness we must ensure that, amidst the broken glass and sadness, we don't sweep away the youth lost amongst the shards in the shadows cast by the new dawn. more here

And finally, the heroic efforts of reporter Paul Lewis have provided a continuous stream of front-line reporting over five days. Constantly on Twitter, daily in the printed Guardian, frequently on that paper’s Live Blog, as well as on radio 4 and Sky News. You can read his journal here.

Posted by John Dee at 19:01 No comments: Links to this post

Many cities have visible signs of earlier life, often of an industrial and commercial past. The first four photographs show such signs, all within 500 metres of my home. I like them because they are about the only reminder that the area used to be a big centre for the manufacture of furniture. 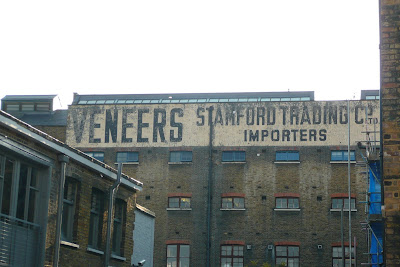 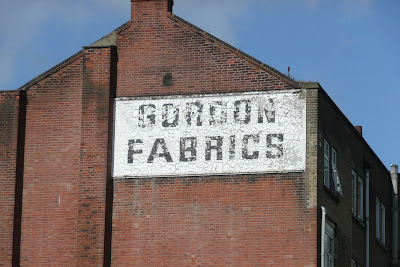 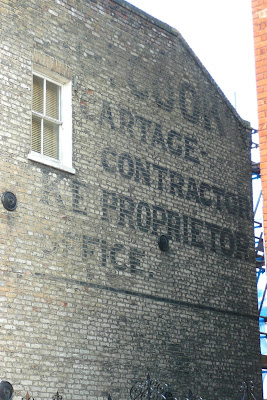 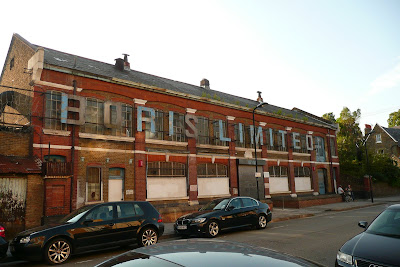 This sign caught my eye a few days ago. It is on the back of a building on Highgate Road, facing west onto Hampstead Heath. I wondered if the sign had been aimed at those enjoying the Heath and wishing they had brought a picnic. Certainly late on Tuesday afternoon there were great many people lazing in the sun who might in earlier times have been tempted. Unfortunately the shop below it is now just another restaurant. 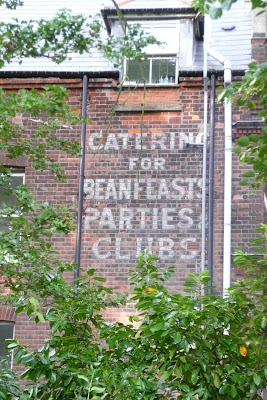 With a hyphen, bean-feast is described thus: A bean-feast is primarily an annual dinner given by an employer to his workmen. By extension, colloquially, it describes any jollification. The word, and its shorter form "beano," are fairly common in Britain, less known in the United States. More here.

Without the hyphen, Wikipedia says: In Britain, Beanfeast is a vegetarian processed food made from soya. It is sold in dried form, in packets, to be mixed with water and boiled.

Posted by John Dee at 17:37 No comments: Links to this post

If you know Subbuteo, you’ll recognise this, a life-size version of the table top game. Adults, with their hands restrained on bars, and only a limited amount of reach, playing football and having fun. I came upon this in the City, set up to raise funds for the charity Whizz Kidz, “a charity that is all about giving disabled children the chance to lead a more independent life. “ 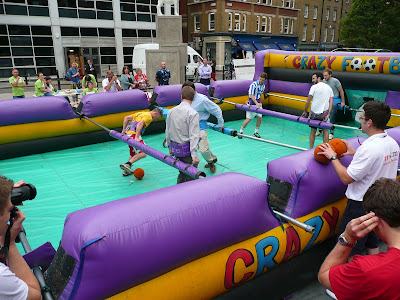 Posted by John Dee at 11:51 No comments: Links to this post