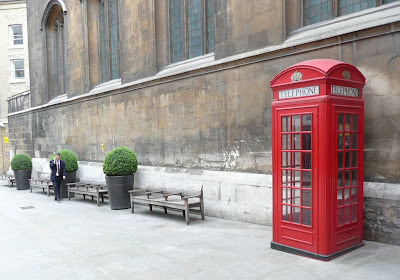 Some people have fairies at the end of their garden. We have a red telephone kiosk, one of the most beautiful examples of street architecture ever devised. Sadly, it is hardly ever used now – killed by the unstoppable march of the mobile phone.

That is the enticing introduction to an article by Victor Keegan in Technology Guardian.

Posted by John Dee at 12:23 No comments: Links to this post

Art - please, somebody, give me a clue 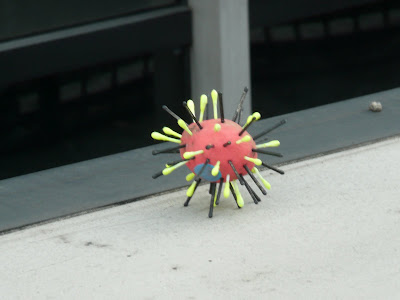 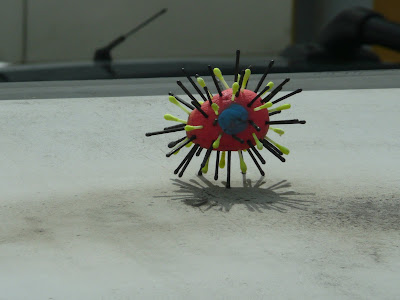 In my post of 11th August I wondered how artists managed to put their work in such out of the way places as 20 feet above Fleet Street. There was more on this topic on the 17th August, and on both occasions I wondered what it all meant. Well I’m none the wiser, and here is another puzzle.

I first noticed these strange little objects about two years ago, on the roof of bus shelters around my part of London. They disappeared last year but today I noticed that they are back. These were spotted from the top deck of the 243. I can’t tell if they are made from old tennis balls, or possibly potatoes, with steel or plastic rods stuck in them (sorry about the ‘un-arty’ description).

These three are on the roofs of shelters at Shoreditch Town Hall, Old Street and on Clerkenwell Road.

Please, somebody, give me a clue 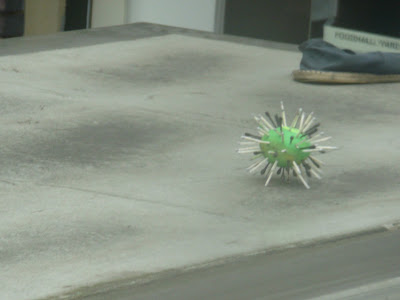 Posted by John Dee at 17:46 No comments: Links to this post 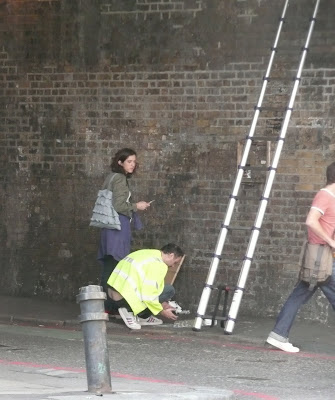 In my post of 11th August I wondered how artists managed to go around London installing their work in all sorts of public places, and get away with it. That is, they seem to avoid the heavy hand of officialdom.
Just a few days later I had the answer.
I watched this couple at work the bottom of Kingsland Road in the middle of the afternoon. 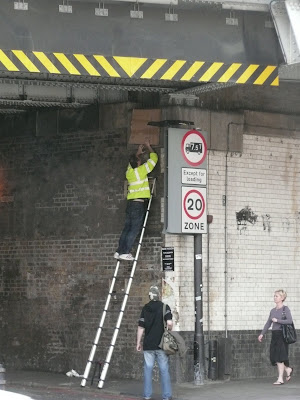 The answer seems to be to get a yellow hi-visibility jacket, a ladder, an 'assistant' with a clipboard, and look as if you are meant to be there.
Clearly, nobody is going to stop you.
I don't know what the artwork is about. Can anybody enlighten me? 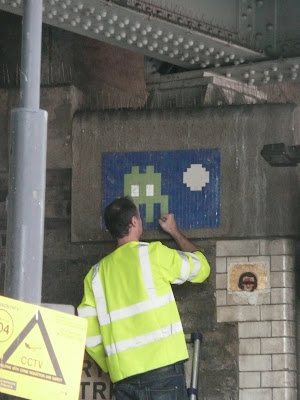 Posted by John Dee at 17:03 No comments: Links to this post

I had a call last night from a reader of this blog to thank me for my tip-off about the O2 scam and the importance of checking bank statements. On his account he found a £1 payment to a charity which he hadn’t made; this was also a scam. It’s what is called a ‘tester’. They make a small theft, which might well be plausible, wait to see if you notice, and if you don’t they hit you for a much bigger sum a few weeks later. So, keep checking your statements.

It’s a sign of the changing world of rugby, now 14 years into the professional era, and also a sign of the determination of Toulon to rise to the top of the French Super 14 competition. Under their millionaire owners, clubs will now pay top wages to secure the best players from all over the world.

For me, it was the first game of the new year in the northern hemisphere, and I watched it unfold down on the Cote d’Azur from the comfort of my chair, with a glass of wine to hand, thanks to ESPN, the Disney-owned sports network which has taken over from Setanta.

There was a lot of English attention on this game as Jonny Wilkinson joined Toulon over the summer and was playing his first game for 10 months. In fact he’s had six very difficult years since kicking the winning points in November 2003 in Sydney (yes, yes, I was there). The England national coach Martin Johnson seems determined to include Jonny in his plans so we are all interested to see how the old man (now 30) stands up to the rigours, and if his general skills are still as sharp as his kicking.

For the girls: Wilkinson looked very fit, and now has gold highlights in his blond hair**

The result: a respectable 22 – 22 draw in front of a capacity crowd.

And did she? Well I don’t know, and I’m far too polite to ask.

Posted by John Dee at 10:49 No comments: Links to this post 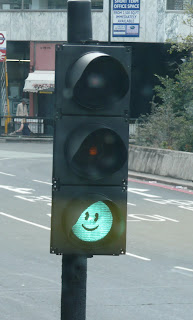 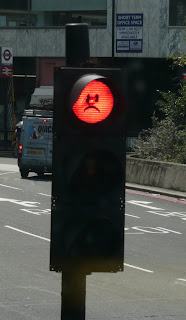 These should cheer you up as you drive to work. Spotted at the Old Street roundabout.
Posted by John Dee at 16:15 No comments: Links to this post

Browsing my bank statement today I saw two transactions for £15 each with the entry “02(UK)Ltd PrePay”. As I don’t have a pre-pay telephone this caught my eye.

So I typed the entry into Google, which returned sufficient entries to convince me that it’s fairly common, and that I’d been scammed. There is a typical piece here

I spoke with my excellent bank, the Co-op, who handled it with their usual efficiency, putting a ‘stop’ on my card, and there will be no cost to me. However, I do have to wait 7 working days for a new card which is frustrating. I wonder how the scammers do this, how they get my details.

I think we all fear having our accounts riffled for a few hundred pounds or more. It may be that such relatively small sums as £15 will go unnoticed by many people.

So, folks, always check your bank statements – even the small sums.

Posted by John Dee at 14:01 No comments: Links to this post

Well it had to happen. One of the Trafalgar Square ‘Plinthers’ stripped off last night.

“Naked 'living sculpture' in Trafalgar Square forced to cover up”

I’m curious to know why he had to cover up, and under what law the police can insist on this. The Naked Bike Ride is now a well established event in many UK cities, and over 1000 NAKED PEOPLE rode through London in broad daylight in June. The Plinther even chose to do it at 1 am – not many people around at that time. Surely all Daily Mail readers would be tucked-up in bed.

Go here to see the video coverage. Be warned: There Is A Naked Human.

NB: I noticed that he smelt his socks as he took them off - a nice touch that.

Posted by John Dee at 18:43 No comments: Links to this post 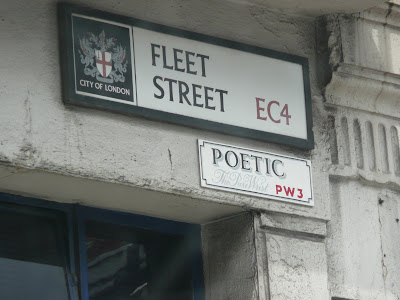 Calling all you Artists out there: do any of you know what this is about?
I've seen one of these in a side street off Brick Lane, and saw this one in Fleet Street (well you can tell that can't you).
It's the 'Pure Wrist' that intrigues me (click on the photo to enlarge it).
I also wonder how the artist managed to fix them - this one is about 20 feet above the pavement. Answers please.
Posted by John Dee at 18:13 1 comment: Links to this post

When I moved into this area six years ago I was pleased to discover that my new home was on four bus routes, three of which are night buses. This super-provision is largely because Hackney is not on the Tube network. However, I recall my frustration in my early months here that during the morning rush many of the buses arriving at my stop were already full. There was a degree of pushing to get onto the bus, not always successful, and fairly unpleasant and sweaty journeys; the elderly and pregnant really got a poor deal. 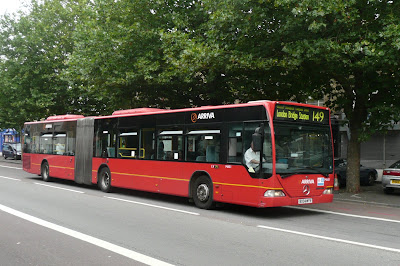 Things improved in 2004 when the new ‘bendy buses’ were introduced to my route and never again were people unable to get onto the first one that came along. There are 393 of these Mercedes Benz ‘bendys’ across London and they do a great job of shifting very large numbers of people in a short space of time.

After some early and predictable bleating from cab drivers they quickly seemed to become an accepted part of the London transport system, particularly in those areas without Tubes. There were stories, largely in the Evening Standard, that they were responsible for the deaths of cyclists – they are 53m long – but TFL deny this, and I can find no evidence from cycling campaign websites that support this either. However, in 2008 when Boris Johnson was campaigning to be Mayor of London he made the abolition of the supposedly unpopular bendy buses one of his pledges.

Like many other people, I’d assumed that once ensconced in City Hall, Boris’s pledge would quietly disappear, and that he’d focus instead on his other promise, to restore the Routemaster bus, the 50 year old design icon of London, with the open platform at the back which have all been withdrawn apart from on two special tourist routes.

So, I’m surprised and disappointed to see that the removal of the bendy buses has now started, on route 507.

I’ve done my own mini-survey and three times this week have been on the 149 and seen a full bus (capacity 150 people) plus a further c30 standing. That’s 180 people being moved by one bus, with one driver. The official plan is that they will be replaced by double-deckers, which have a much smaller carrying capacity. To compensate, more buses will be provided although I read that on route 507 they have now been replaced by single deckers – it’s going to be scrum-time when Londoners return from their summer holidays and the rush hour starts in earnest.

I think this is absolute madness, but the earliest opportunity I’ll have to register my dissatisfaction is the next Mayoral campaign in 2012.......that's democracy.

Posted by John Dee at 16:16 No comments: Links to this post