More on the East London Line – and station architecture

Following up on my previous piece, I spoke with somebody at TfL last week who confirmed that work on the new line is progressing well and is ahead of schedule. I couldn’t get an exact date of the line opening for public service but it sounds very much like June. 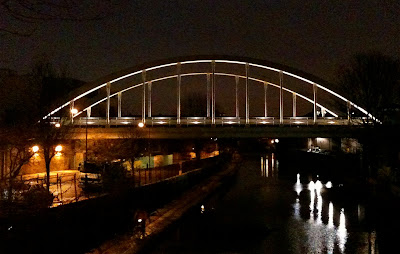 Set against my pleasure in seeing the new line open is frustration at the disappointing design of the stations. The project is another PFI/PPP project and sadly the architecture seems to fit with what we have come to expect from that funding and procurement route. Keep it simple, remove any risk, avoid ambition. 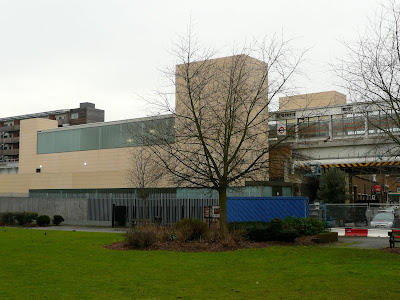 The smaller local stations at Hoxton and Haggerston - above - appear functional, but not much else, and make little contribution their surroundings. Most disappointing though is the new station at Shoreditch High Street – below - an enormous slug-like box that is particularly offensive and imposing, as it is raised many metres above the ground. I couldn’t for the life of me see why this monster concrete box has been imposed on the skyline. It has been in place for about a year now and I haven’t grown accustomed to it. However, I noticed a small piece at the bottom of a TfL webpage which explains that what I’m seeing and objecting to is in fact a concrete shell, erected over and around the station. This is to protect the station and allow the line to stay open when major new buildings are constructed here in the years to come. This seems a smart idea, so full credit to TfL for thinking ahead. However, were development not to take place, then we’d be stuck with the slug-box forever. In the current difficult climate for city office developers that may be a realistic fear. 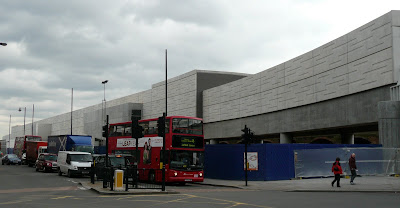 There are in London some really stunning examples of well-designed stations. These are on the Jubilee Line Extension, which is just 10 years old. There are 11 stations, each designed by a different architect, and almost are really successful both below and above ground. The credit for this ambitious approach goes to Roland Paoletti CBE, London Underground’s Chief Architect at the time, who argued for good design, engaged some top class architects, and supported them throughout the years of the project.

Architecture on the Jubilee line – from www.tfl.gov.uk

Architecture of the stations on the extension can only be described as spectacular. All have vast tracts of space and project architect Roland Paoletti CBE has employed world famous architects at the various stations resulting in a statement of importance not seen on the Underground since Charles Holden's designs of the 1930s. Canary Wharf is arguably the largest, although during construction Westminster was the country's deepest and most complex excavation. At London Bridge the new ticket hall imaginatively uses the brick arches below the Railtrack station.

The Railway Industry Innovation Award for 2000 went to the entire Jubilee line extension. The Civic Trust's Urban Design Award was awarded to London Transport and again individual awards went to Stratford and Canary Wharf stations. In 1999 both Stratford and North Greenwich stations were awarded a Royal Institute of British Architects (RBIA) Civic and Community Award.

Posted by John Dee at 17:06 No comments: Links to this post

To all those who have enquired: Hannah and baby (The Bean) are both very well. The scan 10 days ago showed everything is fine, and on course for the end of June. She and Robin are happy not to know the gender of the baby. 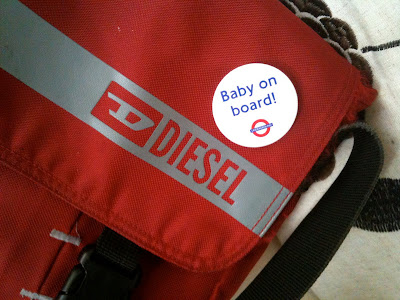 This began for me as a strange tic, something I noticed occasionally and that was all, but in the last six months it has become a real irritant. I’m talking about the weird body-behavior of BBC TV news presenters.

I think it may have started with the idea that the presenter should stand up to read the opening headlines to the ten o’clock news. Presumably it was felt this would be more commanding, would give authority to the bulletin 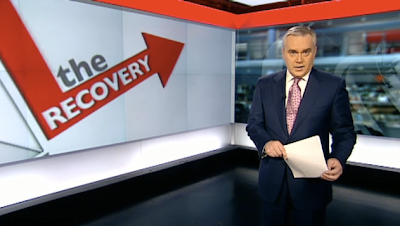 Next came the animation phase, starting with a gentle wave of the script during the standing period, a sort of faux emphasis. Fiona Bruce was an early advocate of this.

Animated hands came back into play when questions were being asked of an interviewee, or when they ‘…go live to Nick Robinson in Downing St…’ where we want to emphasise the rigour of our (scripted) questions to Nick.

There is also the script shuffle. I always look hard at this: I’m not convinced there is anything written on those papers.If there is then, I do hope that on the day the autocue fails Huw Edwards doesn’t try to find his place on the written page. It will have been shuffled into oblivion.

But most puzzling, frankly ridiculous, of all is the strange sit with one arm extended and hand just about as far away as you can get it pose. Huw Edwards is the master of this, but George Alagiah is also up for it too.

If these tics were confined to just one or two presenters then I’d accept them as just that: individual traits. But now they are all at it, it must be a new policy.

I had originally thought this nonsense was limited to just the studio newsreaders but recently have seen it from those reporting out in the field. These people aren’t waving their hands around naturally. If you were to look at footage of these same reporters a couple of years ago they were standing still, talking to camera.

I suspect there are some refuseniks, the real veterans of tv news, who think it’s all nonsense and aren’t inclined to play. John Simpson, Gavin Hewitt, Jeremy Bowen come to mind. The Newsnight team of Paxman, Gavin Esler, Emily Maitlis also appear to be avoiding it entirely; they continue with whatever comes naturally.

So, seriously, how can tv news distinguish itself and appear distinctive? Well how about strong and well written journalism, with complete emphasis on the story? How is it that C4 News is held in such high regard, yet produced on such relatively low budget, has real personality, holds authority to account, without resorting to this sort of childish posing and other nonsense. John Snow simply tells it straight, without reliance on false moves and gestures. His programme certainly has authority.
Posted by John Dee at 14:51 2 comments: Links to this post 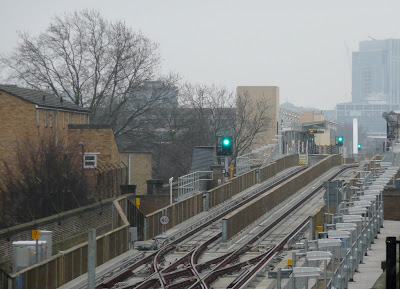 Some exciting news for those who live in my area of London. Within the last week I have seen several trains running on the new East London Line through this part of Hackney. I was aware the rails had been laid, and saw signals working late last autumn, but to see the trains actually running through my new local station is very cheering; I assume they are testing the track, signals and other systems. 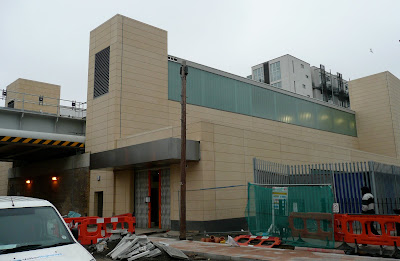 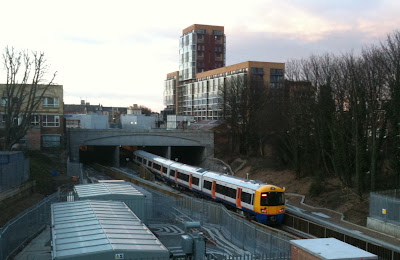 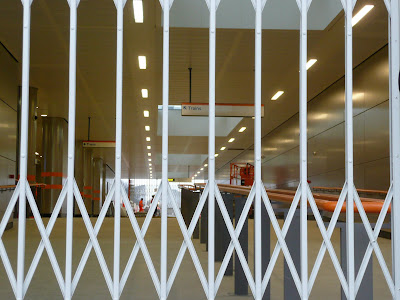 The TFL map of the completed line is here.

The project website is here.
Lots of interesting history at Clive’s Underground Line Guide here:
And on Wikipedia here.
Finally, for the train spotters amongst you there is a Flickr pool of photos here. 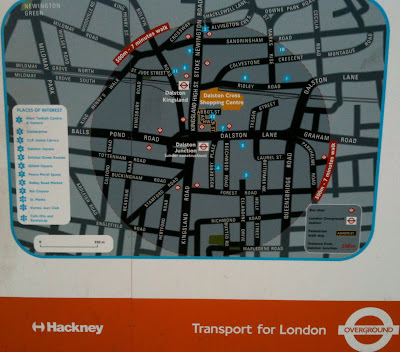 Posted by John Dee at 16:57 No comments: Links to this post

Walford?
No. I spotted this in Stratford E15 yesterday. 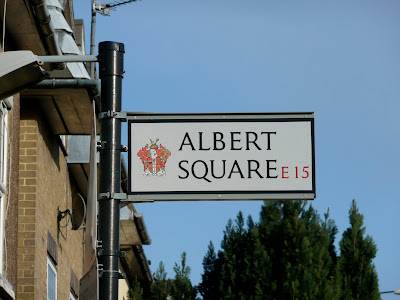 Posted by John Dee at 10:28 No comments: Links to this post 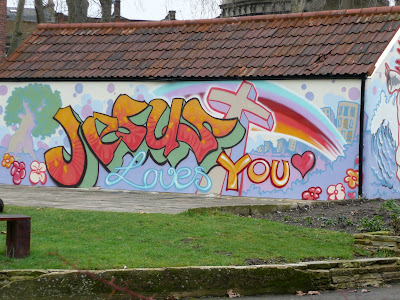 At first glance you’ll think you know what it is: yet another old building in East London which somebody has decided to ‘revive’ through the medium of the spray can. 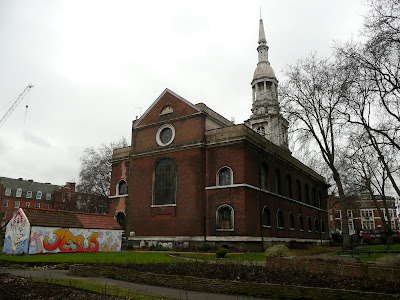 I had read that the church has strong theatrical connections as the first purpose built theatre in England stood close by, and some early theatrical celebrities are buried there. So today I thought I’d wander down and take a look inside. 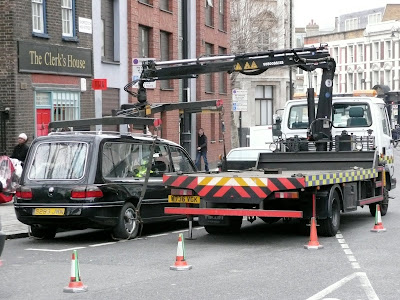 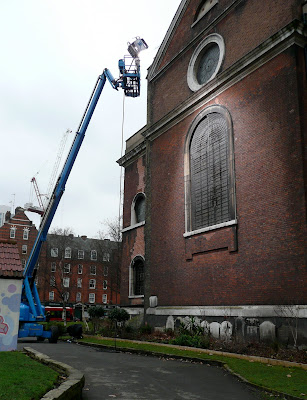 In fact it was a film crew, using the church as a location for a new tv sit-com. I was able to slip inside whilst they shot an exterior scene and picking my way over cables, stands, make-up boxes and the inevitable tea-urns could have a good look. The church is impressive, quite simply decorated, and in some disrepair with evidence of water penetration at roof level. I shall go back another time to find the various memorials to the actors but when I came out I found actor Tom Hollander on the pavement, in cassock, pleading for the hearse to be lowered back down on to the road: a scene from the show being rehearsed. 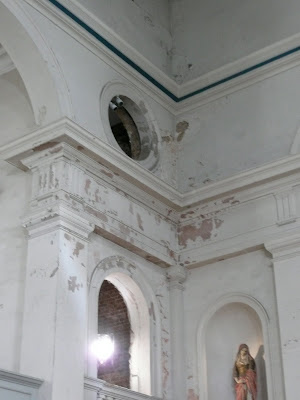 The church has a Wikipedia entry at: http://en.wikipedia.org/wiki/St_Leonard's,_Shoreditch

Posted by John Dee at 20:46 No comments: Links to this post