Have a very happy Christmas - and think of warmer times to come. 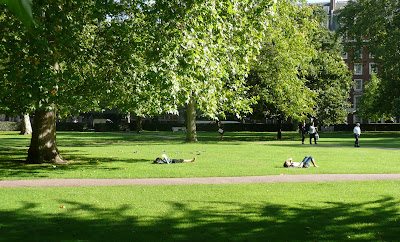 Grosvenor Square London, September 2010
Posted by John Dee at 12:43 No comments: Links to this post 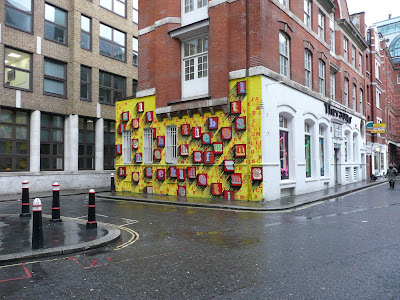 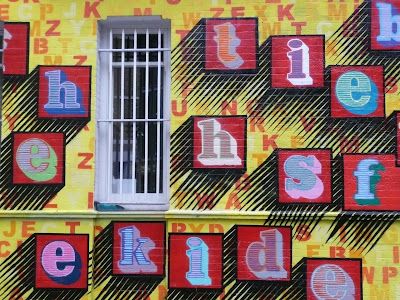 On a cold, snowy afternoon in the City I came across this cheery scene. I think it is probably the work of graffiti artist Ben Eine, who made his name with his ‘alphabet’ shop fronts, all over Shoreditch, Whitechapel and beyond. I’m sure that this installation will have been done with approval, because it is so complex and must have taken many days. Up close, I think I can detect five ‘layers’ of work, from the first background coating of the wall, to the final individual letters.

Last summer Barack Obama was presented with a Ben Eine painting by David Cameron. From the graffiti community to establishment artist, success has come to him as it has to his compatriot Banksy.

(Double-click on the photographs to enlarge them) 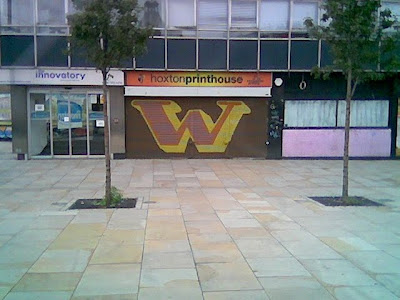 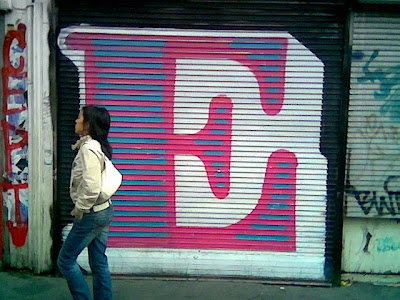 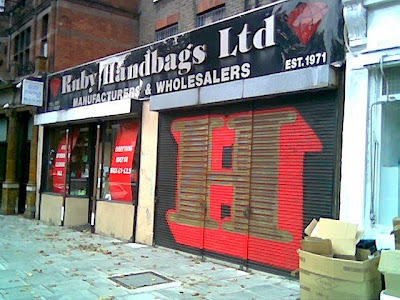 Posted by John Dee at 13:01 No comments: Links to this post

The daylight fades quickly: this was at 16:21 hours yesterday 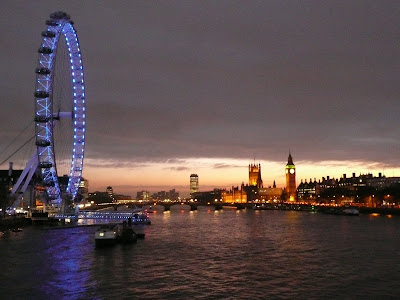 Posted by John Dee at 17:35 No comments: Links to this post

A great success here for the photographer who caught this snap and then saw it used by almost all the national papers. Six out of eight in this collage, and it also appeared in the Express. The Scotsman, Yorkshire Post, Belfast Telegraph, and BBC News all used it on their web homepages. 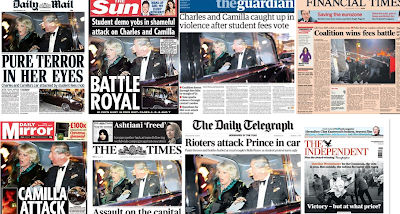 UPDATE: Roy Greenslade has a report here about how Matt Dunham got this photo.
Posted by John Dee at 11:58 No comments: Links to this post

I saw this today in Banner Street, EC1 and I think it’s lovely. The ‘canvas’ is a couple of the steel cabinets used by the cable broadband companies, usually painted a dull green. The artist is Teddy Baden who seems to specialise in images of dogs. I assume this is meant to be the Old English sheepdog featured in the Dulux adverts – very appropriate really, given the medium Teddy works in. 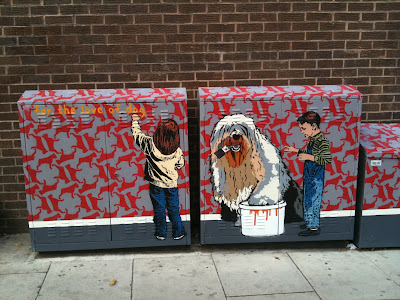 Posted by John Dee at 17:06 No comments: Links to this post 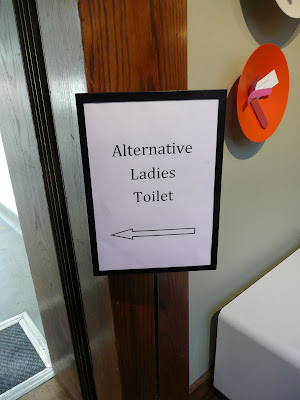 Alternative: of or relating to behavior that is considered unconventional and is often seen as a challenge to traditional norms

Posted by John Dee at 11:13 No comments: Links to this post

Every day is a day for thinking about family, but today has special significance for me. If he were still alive, my father would be celebrating his 100th birthday today; he died in March 1999. Here he is with his grandson on Christmas Day 1998. 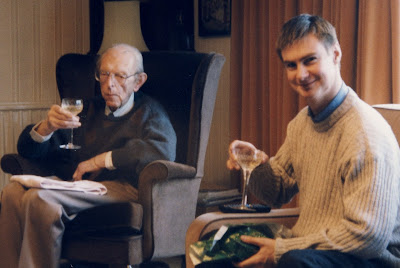 I have been puzzled recently to see Helen Mirren in a television advert for Nintendo Wii – not the sort of product I expected one of our theatre dames, and an Oscar winner, to be advertising. It all became clear on Wednesday when this article appeared in the Guardian. She is speaking out for sufferers of Parkinson’s disease. My father self-diagnosed his Parkinson’s and I’m afraid it blighted the last 25 years of his life, and of course my mother’s life too; she died eight months after him. Today, I am very happy to remember him, and will raise a glass this evening.

Posted by John Dee at 23:18 No comments: Links to this post

There is a most unusual installation at Tate Britain. In the enormous Duveen Galleries, the two central spaces you walk into on first arriving, artist Fiona Banner has installed two warplanes. Her piece is called Harrier and Jaguar 2010, and is composed of two decommissioned planes, a BAE Sea Harrier ZE695 and a SEPECAT Jaguar XZ118. These are not what you expect to find in an art gallery, even one as adventurous as the Tate, and the first reaction is surprise and shock.

The Jaguar has been stripped of all its markings and its paint, and lies upside down on the floor. It is beautifully polished, sleek, silver, looks touchable and unthreatening. It reminds me of some desirable design object, a domestic item from Allessi, or possibly a trophy, certainly not a weapon of defence and warfare. It is also smaller than I had imagined. I peered into the cockpit, surprised at how small it is. I don’t want to appreciate it, but it is strangely beautiful. 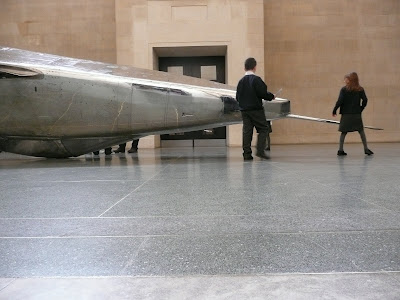 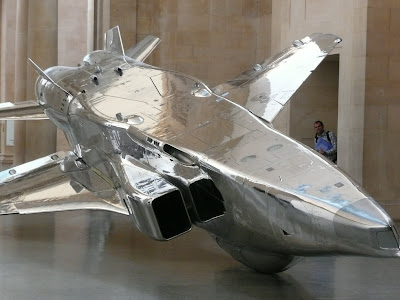 The Harrier hangs from the roof, pointing downwards, its nose almost touching the floor. By contrast, it is dull, grey, and looks exactly what it is : a fearsome machine of war. There is nothing glamorous about this. The feathers drawn discretely on its bodywork do nothing to soften this crude and threatening machine. The party of schoolchildren are dwarfed by it, although they don’t seemed overawed. 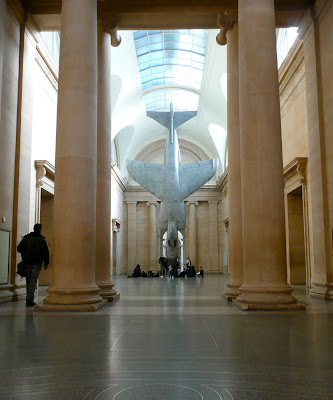 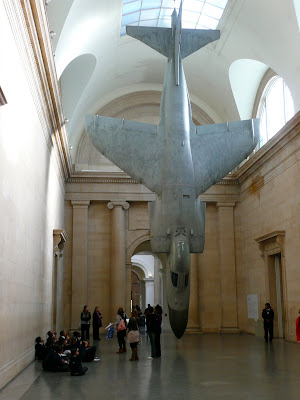 Why my different reactions to the two ? It must be the polished silver versus the industrial grey, and perhaps the closeness and touch-ability of the Jaguar set against the Harrier, which towers above me, threateningly. Both are very much at odds with the grand but gentle and familiar Victorian spaces of the Duveen Gallery.

Ironically, the last Harriers (‘jump jet’) took off from the deck of the Ark Royal this month: they are all being decommissioned, 80 of them, as is the carrier, as part of the government’s Strategic Defence Review.

Fiona Banner, is a British artist in her 40’s, who has long been fascinated by the emblem of the fighter plane.

"I remember long sublime walks in the Welsh mountains with my father, when suddenly a fighter plane would rip through the sky, and shatter everything. It was so exciting, loud and overwhelming; it would literally take our breath away. The sound would arrive from nowhere, all you would see was a shadow and then the plane was gone. At the time harrier jump jets were at the cutting edge of technology but to me they were like dinosaurs, prehistoric, from a time before words." – Fiona Banner

Reviews of Harrier and Jaguar 2010 by Charles Darwent in the Independent and by Adrian Searle in the Guardian.

Once again I am impresed by the skills of the Tate staff in mounting such a complex piece. How did Tate Britain hang a Harrier jet? Leo Benedictus has the answer here.

Posted by John Dee at 12:01 No comments: Links to this post