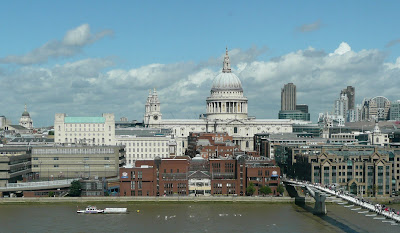 Strong winds today kept the rain clouds moving, which gave me a chance to grab this shot of a small but important part of the London skyline. Double-click on the photo to see it at its best.

Working from left to right, the first notable building is marked by the dome of the Old Bailey, officially The Central Criminal Court in England, dating from 1902. You can’t see the famous scales of justice in this shot but you can read all about the building here.

The large green roof is on the Faraday Building, 1933. Named after Michael Faraday it became the telephone centre of the world with the opening of the international telephone exchange. It is now BT’s main telecommunications data centre serving the City. The construction of the Faraday Building obscured the riverside view of St Paul’s Cathedral and lead directly to the legislation protecting the views of St Paul's that has been used to thwart large buildings being erected around the various vantage points to see the cathedral.

Directly in front of it is the dull concrete block known as Baynard House, another BT building, now in a very poor state.

Next to that is the red brick City of London School 1987, designed by Thomas Meddings, an old pupil of the school acting in his role as City of London architect. What a fantastic setting the boys have, looking out onto the river.

Dominating everything is the stunning St Paul’s Cathedral by Sir Christopher Wren (1677-1710). Read all about the several buildings on this site, the Great Fire, and Wren's major work here.

Old it may be, but St Paul's has its own website here, with a welcome from the Dean, and better photographs than I could ever take. For my money it is the most significant building in the whole of London. I don’t know why filmmakers always portray London with that clichéd shot of the Houses of Parliament, with a red bus in the foreground. St Paul’s deserves to be seen as the symbol of London.

Running across the foreground is the Milennium Bridge. Opened in June 2000, closed days later, and then re-opened 2002. Still known as the Wobbly Bridge it was designed by Norman Foster, sculptor Anthony Caro and Arup. Arup have an excellent site dedicated to the bridge project here.

Peeping over the top right hand corner of St Paul’s is one of the three Barbican Towers: Lauderdale tower, built in 1974 and designed by architects Chamberlin, Powell and Bon.

There is nothing like the Barbican Estate in scale, intelligence, ingenuity, quality, urban landscaping and sheer abstract artistry anywhere else in Britain, perhaps even the world. That is critic Jonathan Glancey writing in the Time Out 2007 Critic's Review of the Barbican - worth a look, here.

Finally, over to the right is a group of less distinguished city buildings, none of which in my view will match those above.

You too can enjoy this wonderful view, from the 6th floor café at Tate Modern – surely the best “view with a drink” in London. 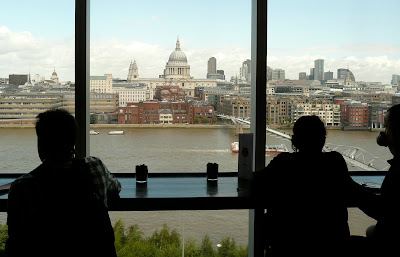 Posted by John Dee at 18:56 No comments: Links to this post

Over thirty years apart, but there is a nice similarity to these two shots. 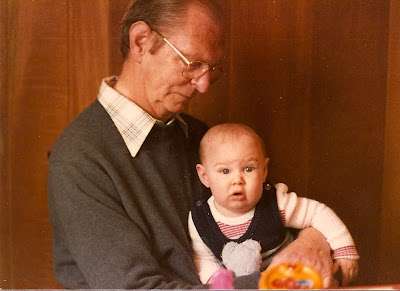 1979: Toby and his Grandpa at Penny Close 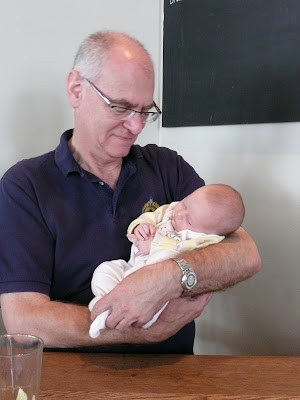 2010: Ella and her Grandpa, Islington
Posted by John Dee at 17:34 No comments: Links to this post

In the late 1980’s Saatchi & Saatchi devised an advertising campaign for the Victoria & Albert Museum which ran with the line “An ace caff with quite a nice museum attached.” It was frowned on by the cognoscenti, but worked very well as a way of drawing attention to the Museum and many new visitors followed.

This phrase came to mind when I went to look at this year’s Serpentine Pavilion: my reaction was along the lines “…a caff, with a disappointing pavilion attached”. 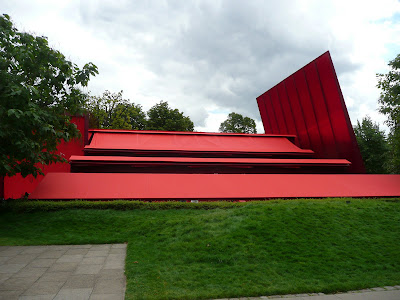 The Serpentine Gallery itself is small, single-storey, sitting in an elegant 1930’s tea room building, to the west side of Hyde Park and close to the Serpentine lake. For the last ten years it has commissioned a temporary summer pavilion, which has stood on the lawns directly in front of the gallery. The original objective was to create an enclosed space in which the Gallery could hold its major annual fundraising events, with some protection from summer showers. It also has to provide a small café and casual seating for the public to use during the day. As it now stands for three months, it has developed a programme of additional arts events, including evening talks and concerts.

The policy is to invite each year a world-class architect who hasn’t previously built in Britain. The chosen one is given a remarkably free hand, and an open budget, to respond to the brief. This year’s choice is Frenchman Jean Nouvel, and his response is disappointing. I found it an odd collection of structural elements, with no real logic as to their purpose other than to provide rudimentary enclosure to the spaces. It is entirely red: the structure, roof, walls, curtains, café furniture and even the waste bins. Why? What’s the ‘story’? 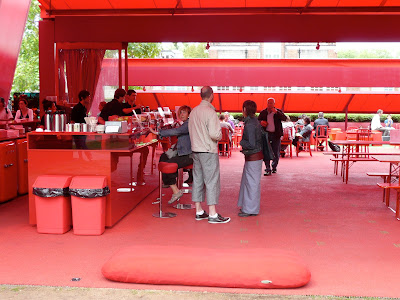 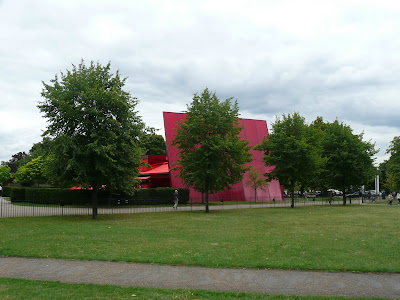 Nouvel said in his opening speech, "I want more disorder in this place," imagining apparently a relaxed place for people to play. Hhmm…Hyde Park has served people rather well for many years as a relaxed place to play. Need to keep the rain off? Well a marquee would have done that.

“The entire design is rendered in a vivid red that, in a play of opposites, contrasts with the green of its park setting, with the colour reflecting the iconic British images of traditional telephone boxes, post boxes and London buses” said one reviewer.

This is all in marked contrast to last year’s lovely pavilion by Japanese architects SANAA which met the brief with a series of open spaces, sitting under an incredibly lightweight ‘roof’, the whole thing hardly intruding on the park at all. I wrote about it here.

Rowan Moore, writing about this years pavilion in the Observer concludes: Few architects have the ability to be as good and as bad, at the same time, as Nouvel. He shows how far a contemporary architect can go by working almost entirely in the realm of image. He also shows that other things, like detail, and the shaping of rooms and sequences of spaces – the things he doesn't bother with all that much – do still matter. 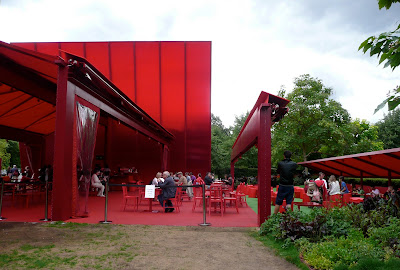 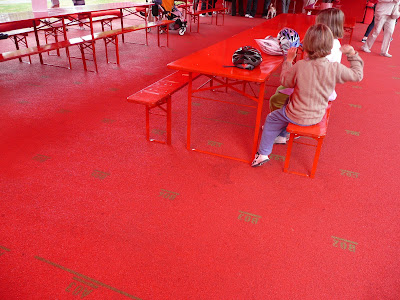 Well yes, it certainly contrasts with the green of its park setting. And it may reflect the traditional telephone boxes and buses, although I’m not convinced it’s the correct shade of red. But that’s not the real issue: I just think it is a very dull idea, poorly executed. The shape and form of the ‘building’ might work better in another setting: perhaps as a landmark chain of service-station restaurants, along the major French auto-routes. But for me it doesn’t work as a summer pavilion. 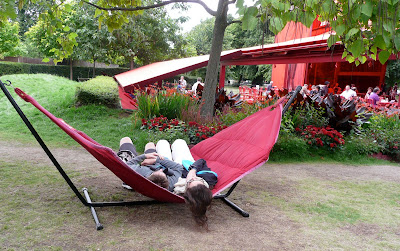 The red hammock is very popular. 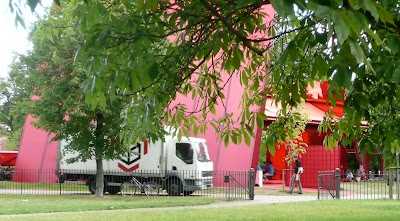 Meanwhile Jean Nouvel now has another project under construction in London, his first permanent building, and it’s a very big building. It occupies a whole city block, fronting onto four streets, the major one of which is called New Change. The developer has named this project One New Change (after it’s postal address).

They had to struggle to get planning permission, given its size, 560,000 square feet of space, and it’s extremely sensitive location, right across the road from St Paul’s Cathedral. Construction is almost completed and it is due to open this autumn, with a mix of vast offices for 3,000 workers, and a vast collection of upmarket shops and restaurants. 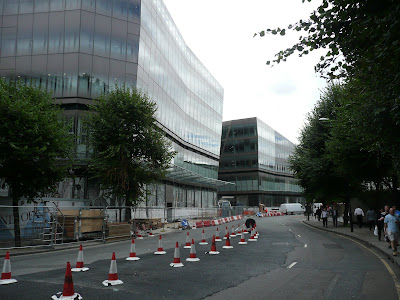 It is another disappointment, a great brute of a building, and I’m also afraid it is going to give real ammunition to those who oppose modern architecture in the sensitive areas of our cities. The recent strife over the Prince of Wales involvement in the Chelsea Barracks scheme shows how powerful this lobby can be. Nouvel’s building gives them all they need to justify future campaigns. 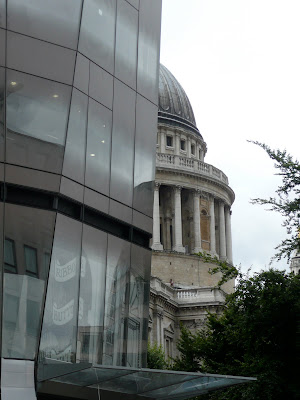 The entire façade is glazed, and has outward sloping upper walls with strange changes in the vertical planes. The glass appears to be fritted, in brown and dark red, giving off a strange ‘fuzzy’ effect. 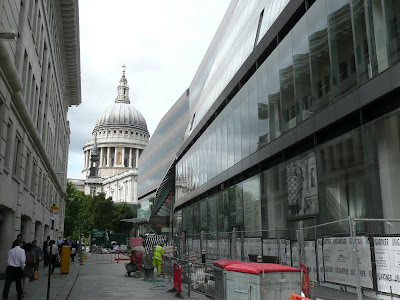 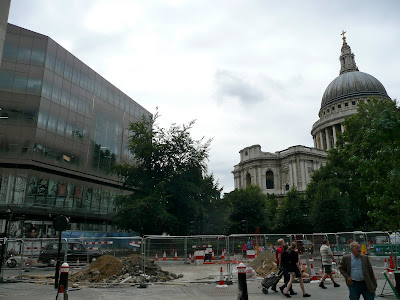 The developer’s website tells us “Nouvel’s projects transform the landscapes in which they are built yet his vision places enormous importance on designing buildings that are harmonious with their surroundings”.

Indeed. It certainly transforms the landscape, and not for the better.

The Serpentine pavilion is temporary, and will be gone by October. Sadly, One New Change is very permanent.

Posted by John Dee at 16:30 No comments: Links to this post

Yes, six weeks old - time Ella was introduced to some of the finer things in life.
Like the designs of Charles Eames and Dieter Rams......and lunch at the Duke of Cambridge. 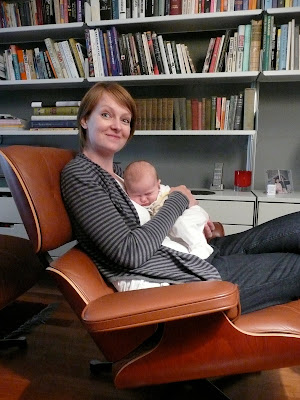 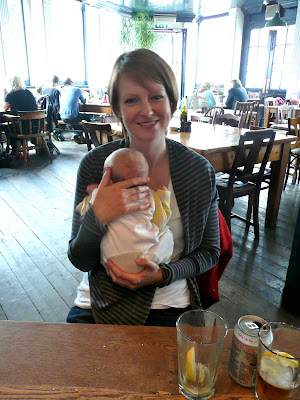 Posted by John Dee at 16:00 No comments: Links to this post

Signs of the times

It must be a sign of the times that my local "everything for one pound" shop is closing down - and reducing its prices until it does. Perhaps that just reflects the local Hackney economy. 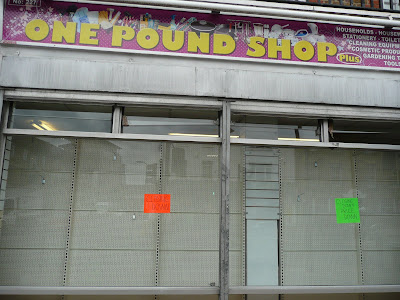 But then an hour later I saw this, not altogether unusual sight, and yet it's on Leadenhall Street, right in the heart of the City, with all that bonus money waiting to be spent. 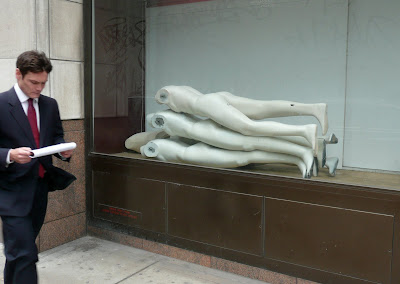 It had been a clothing shop before it closed - not a "gentlemen's club". It seems that the recession can strike anywhere.
Posted by John Dee at 15:48 No comments: Links to this post

There is an interesting piece by Patrick Collinson in the Guardian Money section today, especially if you buy goods and services on the internet:

Most net users know that websites place cookies on your computer (it's how they remember your name and address details). But do they somehow track you, raising prices when you return to a website to make a purchase, knowing that you've been there and are interested in the item? I thought this cookies business was an urban myth, but my experience this week tells me otherwise.

Posted by John Dee at 20:59 No comments: Links to this post 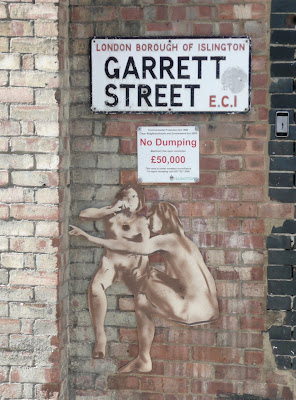 Posted by John Dee at 13:00 No comments: Links to this post 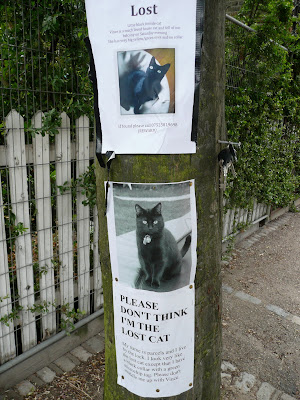 Posted by John Dee at 12:57 No comments: Links to this post