The giant hall at Tate Modern, which formerly housed the turbines when it was a power-generating station, is used for six months each year for a major art installation. I have written before about this, here and here.

As the hall is currently empty, I thought we’d make our own installation with my granddaughter. 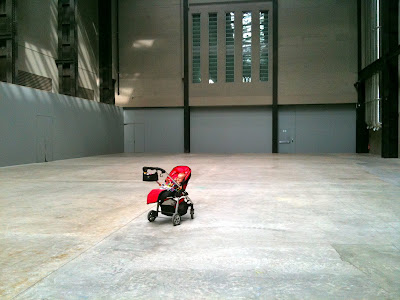 There is a short piece about the building on the Tate’s website. However, I can thoroughly recommend Karl Sabbagh’s book Power Into Art, published in 2000 and still available from Amazon. It is a great read, which tells the whole story of the Tate’s search for new premises, the conversion of the Bankside building, the behind-the-scenes wrangles, and final opening into the world’s most popular gallery. There are reviews here and here.

Posted by John Dee at 11:07 No comments: Links to this post

No, not Murdoch.
This stands beside the Regent's Canal at Denne Terrace. 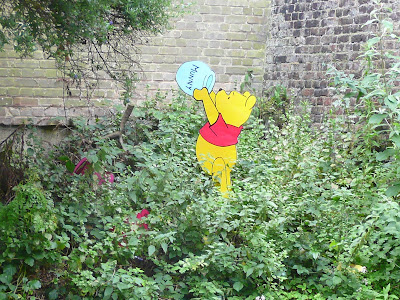 If you have any interest at all in the media in the UK you must have been following the ‘phone hacking story. But on this Sunday morning you will surely also be suffering from overload. It is everywhere, on every bulletin, on the front and insides of every paper, and all over the blog-and twitter-sphere. And yet it isn’t all over, just because Murdoch has closed the News of the World. There is plenty more to come, with confirmation of further revelations to follow from News International, and all the political fallout from Andy Coulson’s employment, two inquiries, the BSkyB affair, the police mis-handling, and so on.

It is interesting to look back at where this all came from, and how we, the public, found out about it. It is due to good old-fashioned journalism, with enormous credit due to journalist Nick Davies and his employer the Guardian.

There was a letter to the editor in the paper on Friday which just about sums up my own view:

“As a long-standing Guardian reader, I just wanted to say how immensely proud I feel of the fantastic public service that my paper has rendered society, finally forcing this disgraceful business out into the full glare of public scrutiny”

As to how the story came about, and how the paper covered it, see this video.

So who is this man Nick Davies? Well you can listen again to a piece from Radio 4’s Profile series, broadcast last night. His own editor, himself due plenty of praise, gives his take on the story here.

I can recommend Davies 2008 book Flat Earth News, of which the London Review of Books said “.. a genuinely important book, one which is likely to change, permanently, the way anyone who reads it looks at the British newspaper industry”.

And finally, at least for now, just in case you thought that tabloid intrusion, hacking, and their generally distasteful techniques were a thing of the distant past, look at this recent experience.

Posted by John Dee at 12:10 No comments: Links to this post

Happy birthday greetings today to my lovely granddaughter. Yes, little Ella is one year old. Here she is, the beautiful little girl who has brought such joy to us all. And it’s a very typical photograph: Ella looking happy, and slightly cheeky, that’s just how she is. 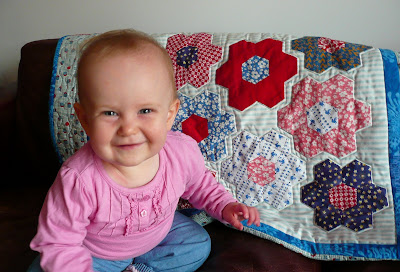 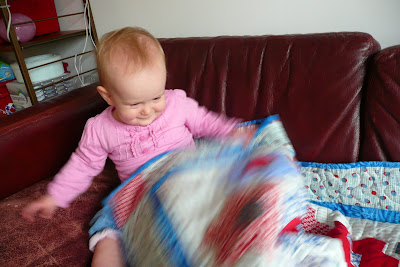 She is holding a lovely quilt, specially made as a present for her mother by Chris Hill, a theatre director friend of Hannah’s. He called it Flowers for Ella, and gave these interesting comments:

“The larger flowers in the garden are made from antique fabrics (mainly from the 60's and 70's) to follow quilting's roots of 'make do and mend' but I mixed them with contemporary quilt fabrics in the smaller flowers (as it was made for a modern lady!). I wanted to do something more like a literal garden rather than a traditional geometric pattern so the flowers are appliquéd on a small section of hard wearing John Lewis fabric my mum bought when I was Ella's age (the piece she had left wasn't the right shape, hence the seam down the centre). Border and binding were chosen to bring out the colours, and the backing was pieced together from scraps (although I do like the pea-pod children!). Quilts have been labelled since the story/message quilts of the American wild west in order to help trace each quilt's roots so I thought it only right to follow tradition.
There you go. Some detail to go with the beautiful detailed pictures of the quilt.” 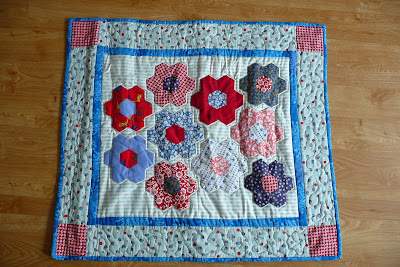 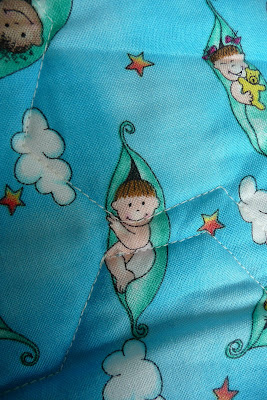 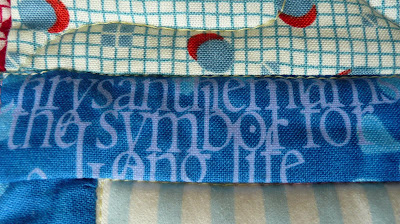 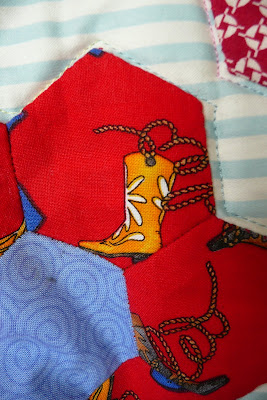 There are more photos of the quilt here.
And many photographs of Ella’s first year here.

Posted by John Dee at 00:07 No comments: Links to this post