Angry and Impecunious of Earlsfield

It was a sunny day in London, with the Bloomsbury and Holborn area particularly pleasant as roads were closed to traffic. The only blot on the landscape was the continual racket from three helicopters overhead – presumably two police and one tv. The reason was the TUC-organised N30 march, protesting at the public sector cuts. There will be the usual squabbling over the number of marchers, with the organisers quoting one figure and the Met police a lower one; it’s always that way. My sense is that there were many fewer than at the student demonstration of one year ago. Interestingly, there seemed to be more women than men, and a much more serious attitude amongst the marchers - reflecting perhaps the anger behind their protests.

My ‘best slogan’ award goes to this man: 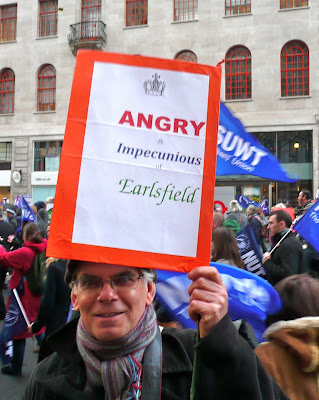 My full set of photos is here, but I've picked out the one below as quite funny. At first I wondered if they were all throwing-up, or perhaps looking down into a lower-level window. Only as I got closer did I decide they were leaning on the MoD stone parapet, filling-in their overtime sheets. So much for reducing the cost of public services. 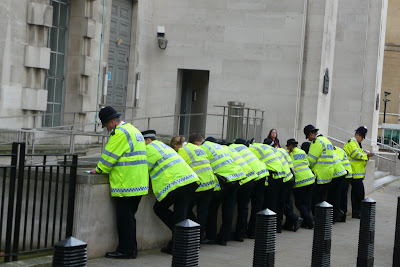 Posted by John Dee at 18:31 No comments: Links to this post 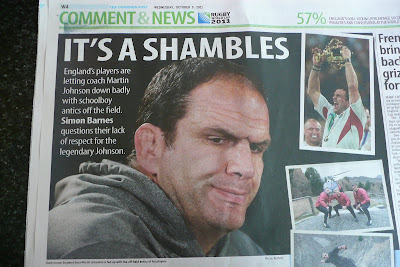 This photograph, which I took on 5th October, is of The Dominion Post, published in Wellington. By this date England had played the four pool matches and were due to meet France in the quarterfinal in three days time.

Since then it’s been downhill, all the way, and we haven’t stopped yet.

Posted by John Dee at 22:37 No comments: Links to this post

I liked this short article by broadcaster and journalist Mark Lawson.

From Strictly Come Dancing to football, there is a class of cursers who literally don't know they are swearing.

If you are one of the 600 people who recently complained about the use of the word “sod” on Strictly Come Dancing, you might be advised not to read the next sentence of this article. If you are the judge who has just ruled that the word “fuck” is not necessarily offensive when spoken in public, you may find the previous sentence inexplicable.

The Telegraph’s report of the High Court case is here:

Posted by John Dee at 21:04 No comments: Links to this post

Funny what you find in second hand bookshops and charity shops. My local is the
Dalston Oxfam, highly regarded round here, not only for the clothes, toys, kitchenware and regular stuff it sells, but also for its blog and poetry readings. There is always a really wide range of music on sale, tapes, cd’s and old vinyls, which has led to the shop having a reputation for musical ‘finds’, as recorded in this separate blog. It also has a Twitter feed.

I was especially taken by the personal message inside the front cover. I’d love to know who ‘J’ and ‘Mikey’ are. 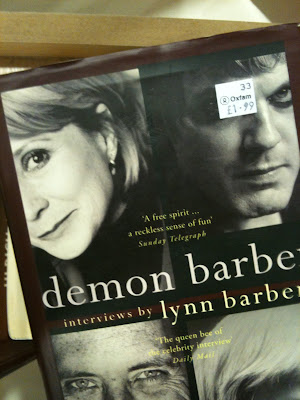 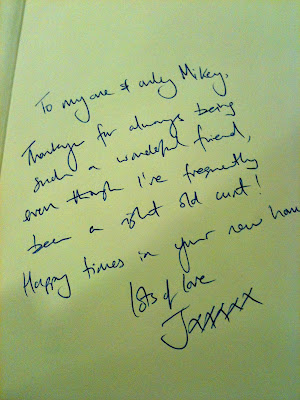 Posted by John Dee at 18:06 No comments: Links to this post

There are thousands of war memorials around the country, with almost every town and village having a stone monument, usually inscribed with names of those from the community who gave their lives. Here is a typical one in Ulverston, Cumbria, bearing the names of local people lost in both wars, including some of my mother’s family. 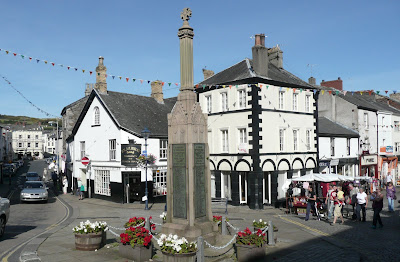 In London, the centre of the nation’s focus is the Cenotaph in Whitehall, where at 11:00 on Sunday the Queen and her government will be joined by representatives of foreign allies, religious and military leaders, for the customary service. Officially, this service pays respect to the dead of both wars, and others since, including the Falklands, Northern Ireland, Iraq, Afganistan, and in other peace-keeping endeavours. 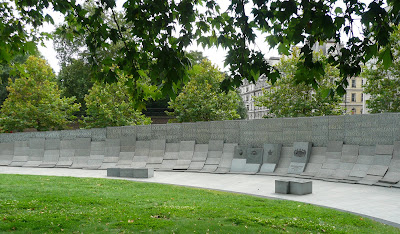 Close by, sitting in a quiet corner of the busy Hyde Park Corner roundabout, is the Australian War memorial. It is in the form of a long curved wall of stone and marks the 100,000 who died in the two world wars. The face is inscribed with the towns in Australia from which the fallen came, and the battles in which they lost their lives. 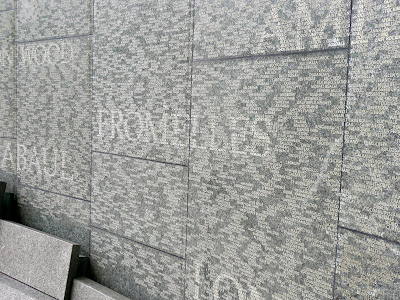 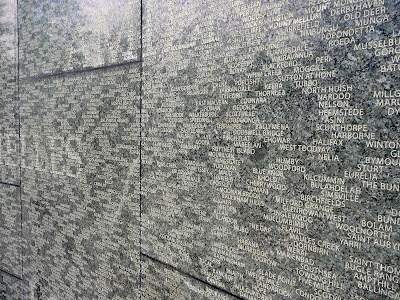 Posted by John Dee at 20:59 No comments: Links to this post

Missed out on Olympic tickets? 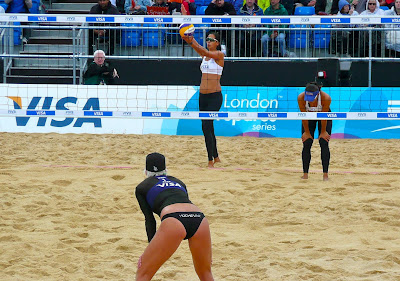 Hot tip: Tickets for the next round of events in the 'London Prepares' series go on sale on the 17th November. If you want to see inside the Velodrome (Hopkins Architects), and the Aquatics Centre (Zaha Hadid Architects) this is your chance. Events take place in February next year.
Details here: http://www.londonpreparesseries.com/ 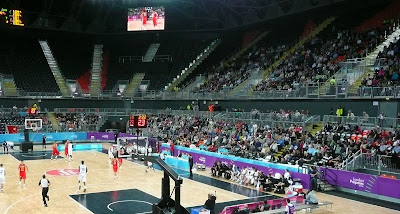 Photos from two "London Prepares' events in August. Beach Volleyball on Horseguards, and Basketball in the new arena at the Olypmic Park (Wilkinson Eyre Architects)
Posted by John Dee at 11:52 No comments: Links to this post 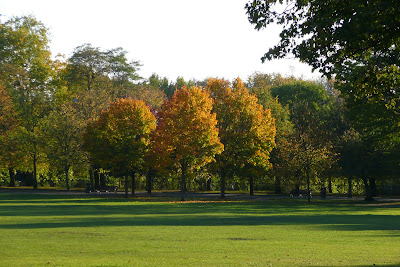 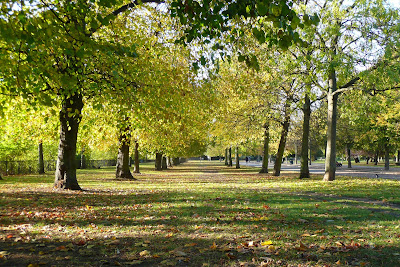 An almost deserted Victoria Park, Friday 28th October
Posted by John Dee at 22:30 No comments: Links to this post 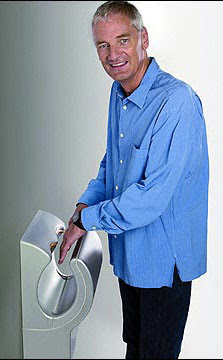 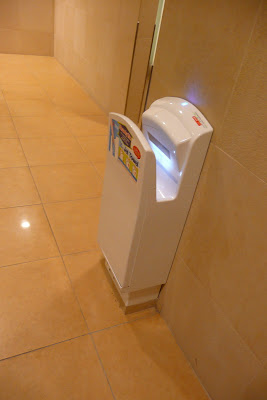 I saw this remarkably similar design in Singapore airport last week
Posted by John Dee at 22:24 No comments: Links to this post