Press Photos of the Year

Something I enjoy at this time is looking back over the year through the many excellent press photographs published in print and online. Here are some links to a selection. You can expect to see riots, wars, tsunami, the Arab Spring, DSK, the economic crisis, Occupy, but there are many surprises too, like reindeer racing, and the space shuttle Endeavor.

The Guardian: Photographs of the Year 2011:

The Telegraph: 2011 The Year in Pictures

Globe and Mail Toronto: The best photos from 2011

Posted by John Dee at 13:03 No comments: Links to this post 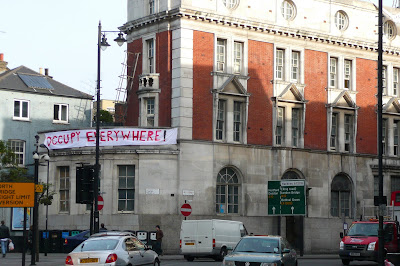 The Occupy London activists have taken over a fourth building, the Old Street Magistrate's Court. The building has been out of use and standing empty for some years, occasionally used as a film and tv location. The Evening Standard has the story here.
Posted by John Dee at 14:23 No comments: Links to this post 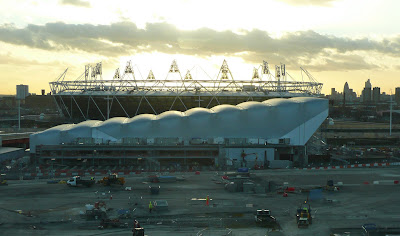 The winter sun slips down behind the Olympic Stadium as early as 14:55 hrs. (Double-click on the photograph to see it better).
In front of the stadium is the unusual shape of the Water Polo Arena, a 5,000 seat temporary building, which will be removed after the 2012 games "..with elements of the venue expected to be reused or relocated elsewhere in the UK".
The designers are David Morley Architects.
Posted by John Dee at 16:53 No comments: Links to this post 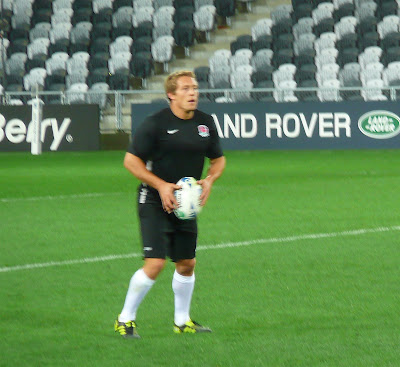 Jonny Wilkinson has announced his immediate retirement from international rugby. My sadness is not about his departure, but about the timing.

I remember his first England appearance in 1998 at Twickenham, the youngest player ever to win a cap.

I was there for his monumental moment-of-glory in Sydney, 22nd November 2003, when he kicked England to victory as world champions. But I was also there for the end: 10th September 2011.

For me, his selection for the Rugby World Cup 2011 was a mistake: for England, for Jonny, and for his many, many admirers. He failed to find his form in Dunedin against Argentina. It was upsetting to watch our once-hero reduced to kicking only 3 goals out of 8 attempts, to hear the barracking from Kiwi fans, and to see his talent fade.

A fine player, a complex man, he won’t be forgotten.

Posted by John Dee at 23:44 No comments: Links to this post

If you have still to buy the tree, you might first like to read this piece by Patrick Collinson.
Under the headline 'Tis the season to be ripped off he warns that 'Anyone spending more than £50 on a Christmas tree must have tinsel for brains'.
Read on here.
Posted by John Dee at 15:47 No comments: Links to this post

How good is the iPhone camera?

I have been unimpressed by the small number of photos I've taken with my iPhone, only ever using it on the rare occasions I haven't had my Panasonic Lumix to hand. All the shots from my recent trip to New Zealand were Lumix shots: I just couldn't have captured the breathtaking scenery on my mobile phone.
Professional photographer Katherine Rose has put the new iPhone 4 camera to the test in an interesting gallery, where she compares shots with others taken on her Canon 5D (a £1000+ camera). See her shots here.
My conclusion: in the hands of a top photographer, who can get the potential out of the iPhone 4, it is much better than I had imagined.
Posted by John Dee at 13:16 No comments: Links to this post